Heading up Ruta 40 to El Chalten was beautiful, the route we were on was mostly through national park. We thought El Calafate was nice but El Chalten was nicer still. The town was surrounded by snow capped mountains and the sun was out, it was so clear, it was truly pretty.
The hostels here were so expensive, we searched around online and eventually found a hotel which was oddly enough half the price of a hostel via booking.com, bargain! I’m so glad we went there because the owner was so lovely and friendly. She cleaned our laundry and let us leave our big bags over night for when we went camping.
We woke up early the next day to do the 9km walk to the campsite. We hired the camping gear from High Patagonia. The gear was rubbish to be fair but it was alright for one night. Gear hired and full from breakfast we headed off on the hike. The hike itself was really nice. 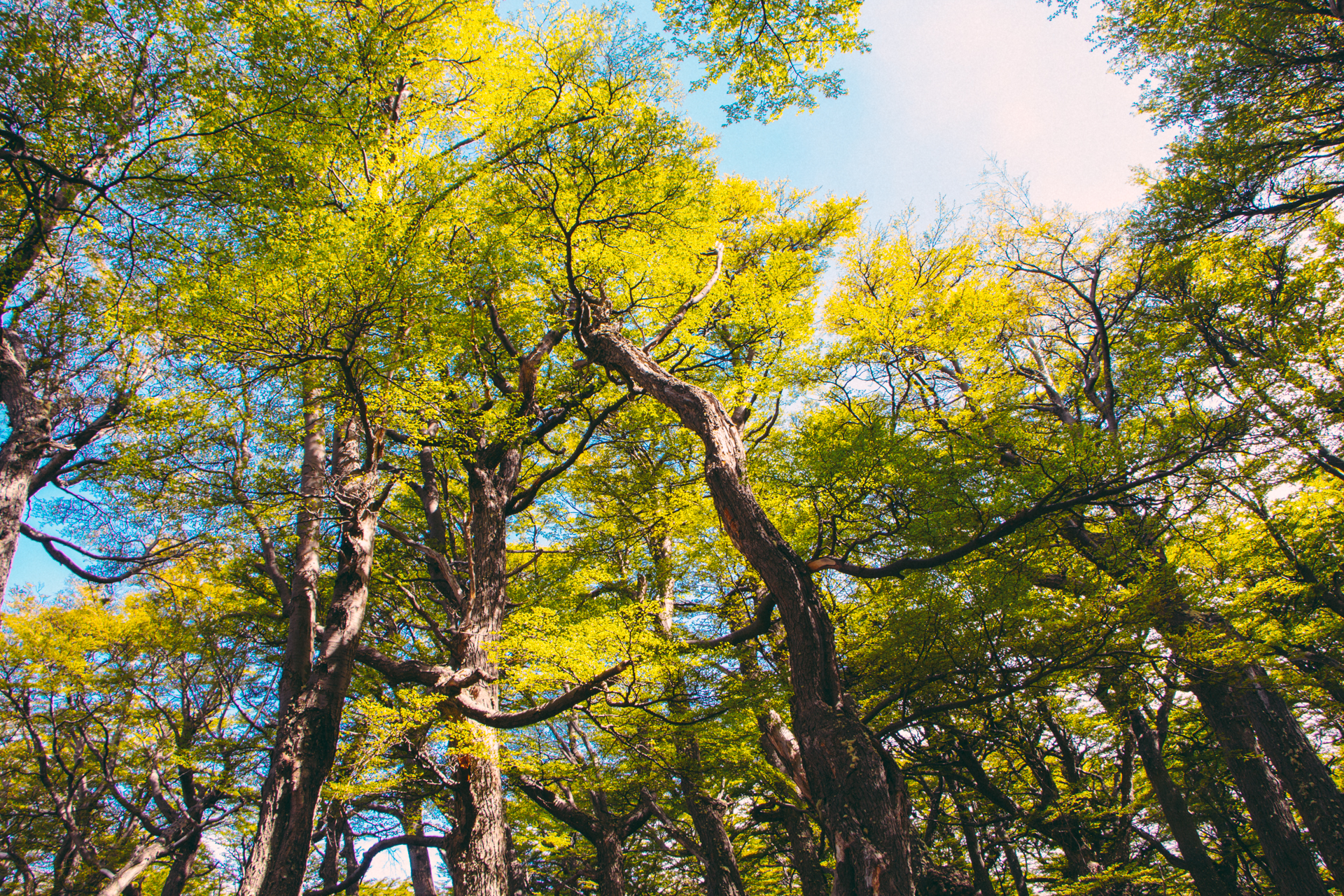 There were so many different terrains that we walked through, I felt like we had tracked the whole of middle earth in the space of four hours. We were just like little hobbit’sis. 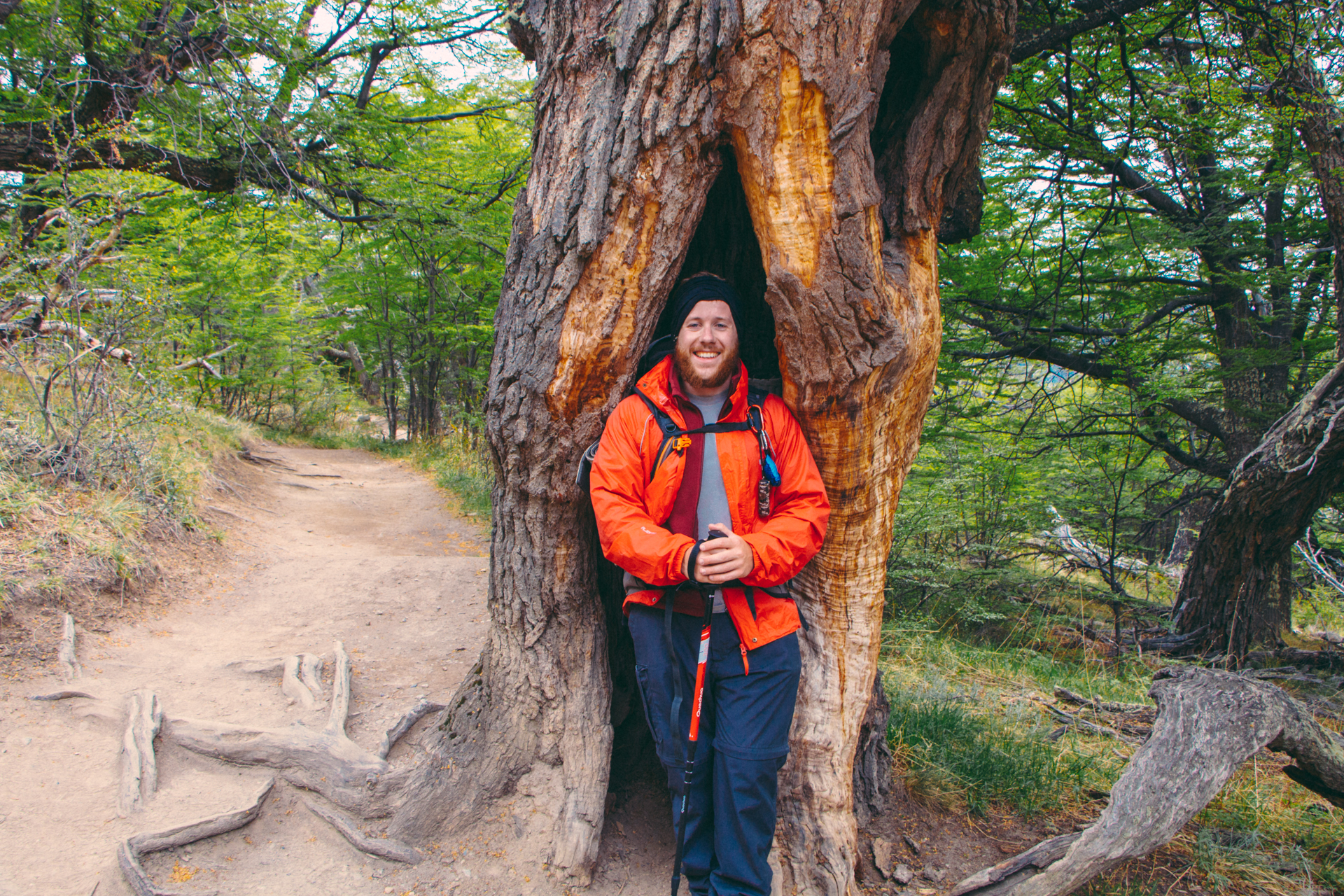 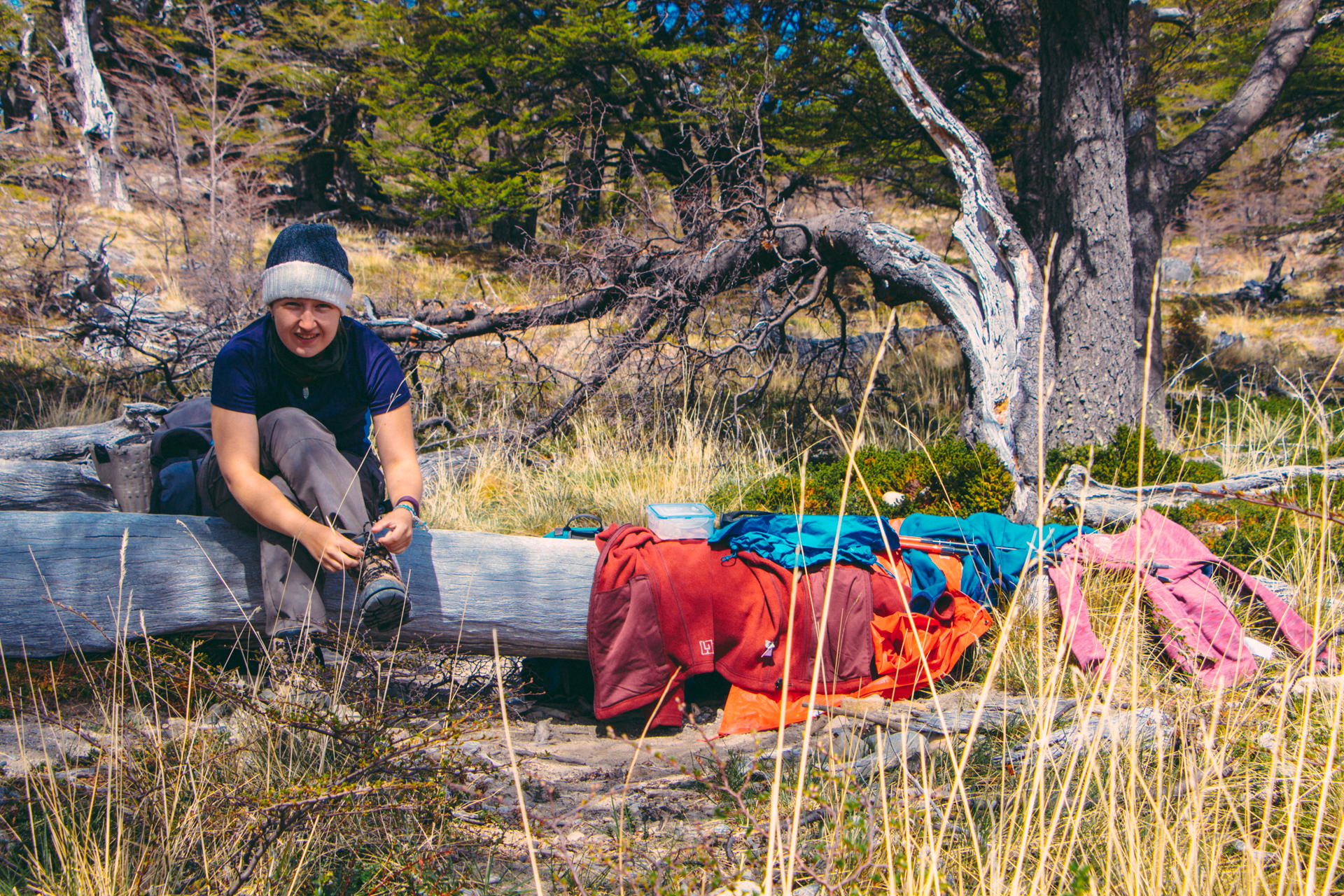 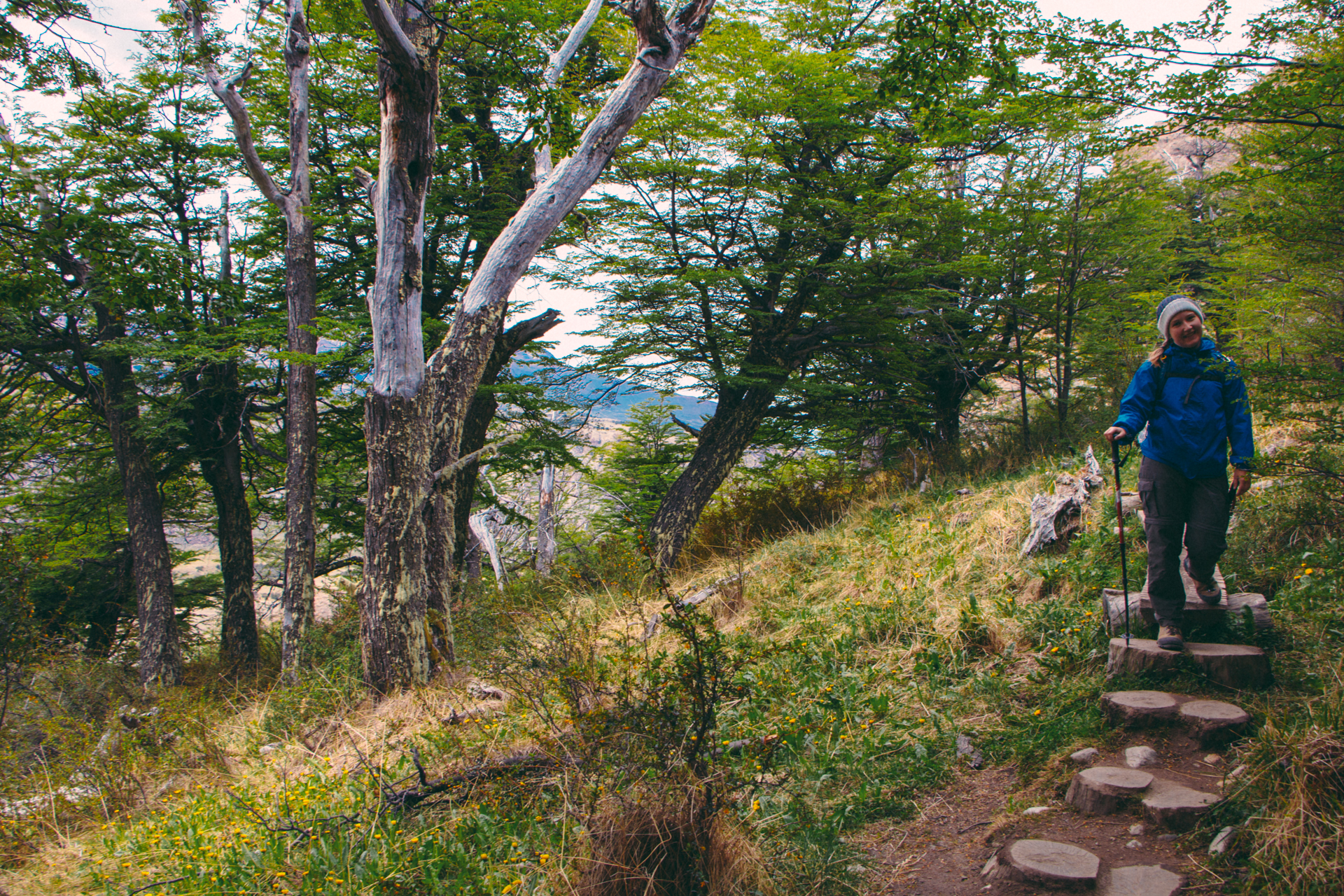 The first 3km was all up hill and through forest. Alex was carrying everything such as tent, sleeping bags, mats, stove and food. I carried the camera and the water, he is so stubborn I wanted to swap but he wouldn’t have it. 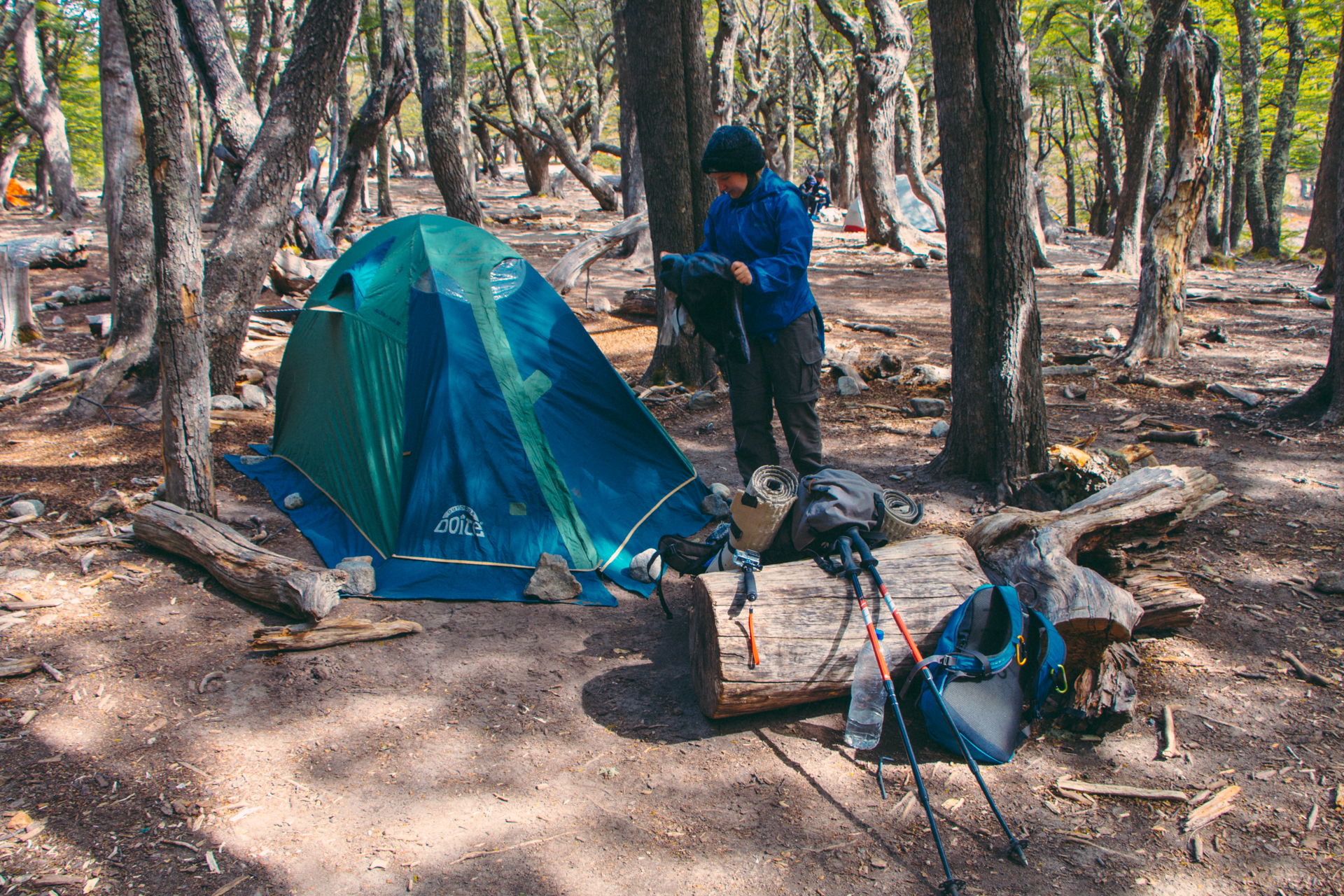 The rest of the hike to the camp site was easier and through rocky mountain tops and marshlands which wasn’t so bad. When we arrived at the campsite it started to snow which was not great because once we put the tent up we realised it was covered in patches and the sleeping bags were terrible — all the stuffing had gone around the feet area in mine which meant my feet were warm but the rest of me was freezing, they were just like the sleeping bags kids use for sleepovers at friends houses. 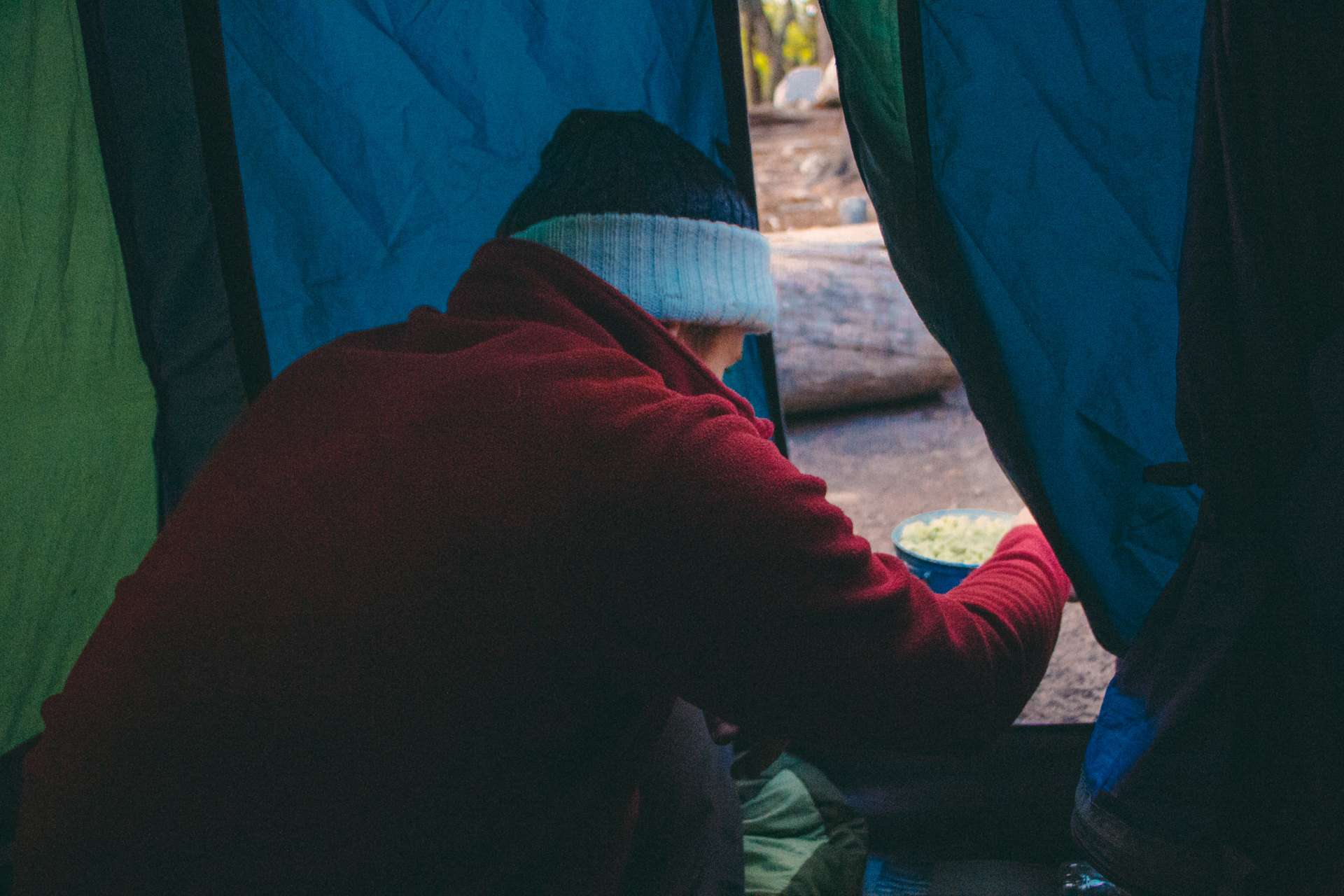 I think Al was in his element though, he cooked us dinner on a gas stove and collected water from the ice cold stream. I sat miserably cold in the tent during all of this. The water all around El Chalten is drinkable, this was awesome because it meant we had fresh cool water with us. It was the clearest water I have ever seen on this planet. 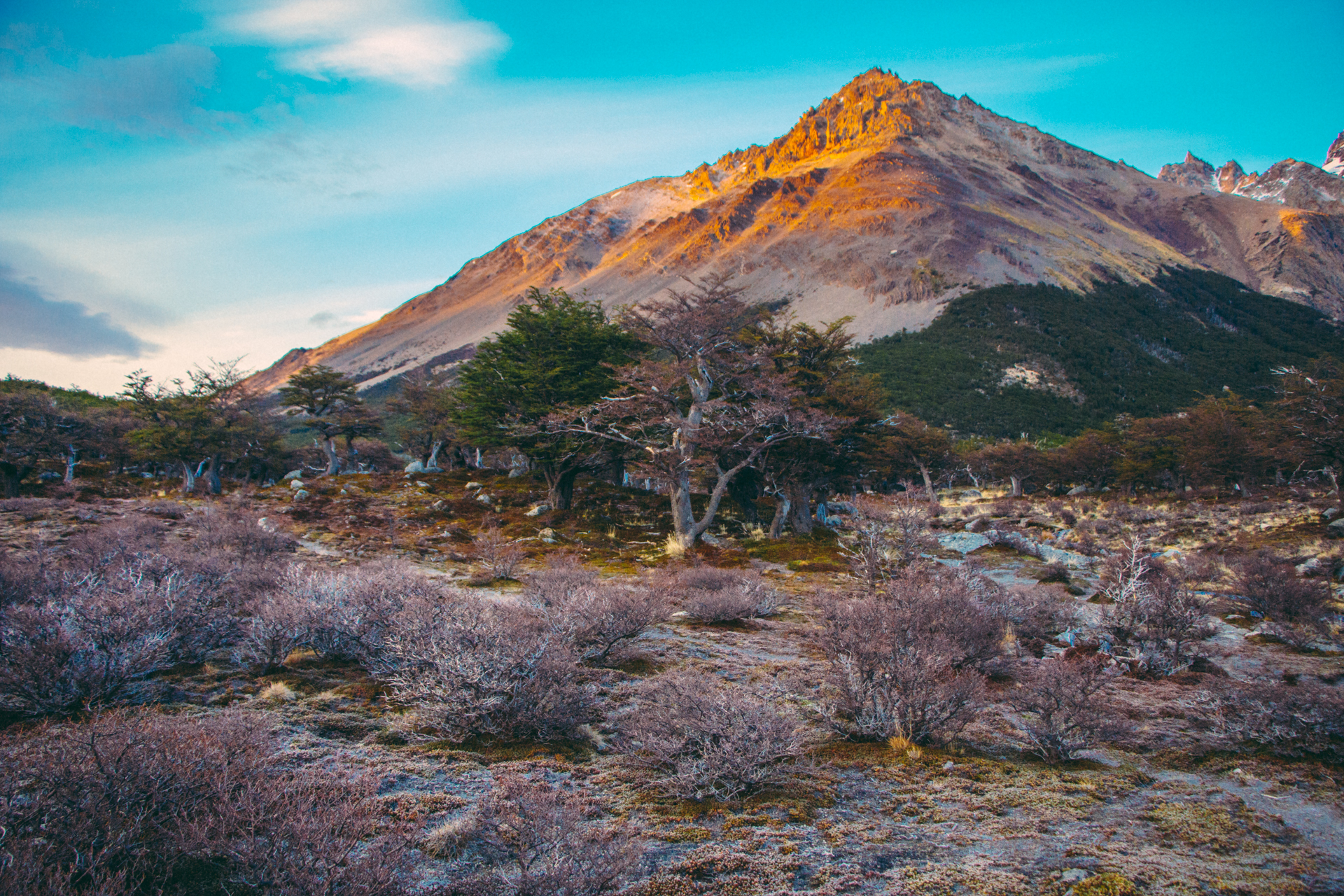 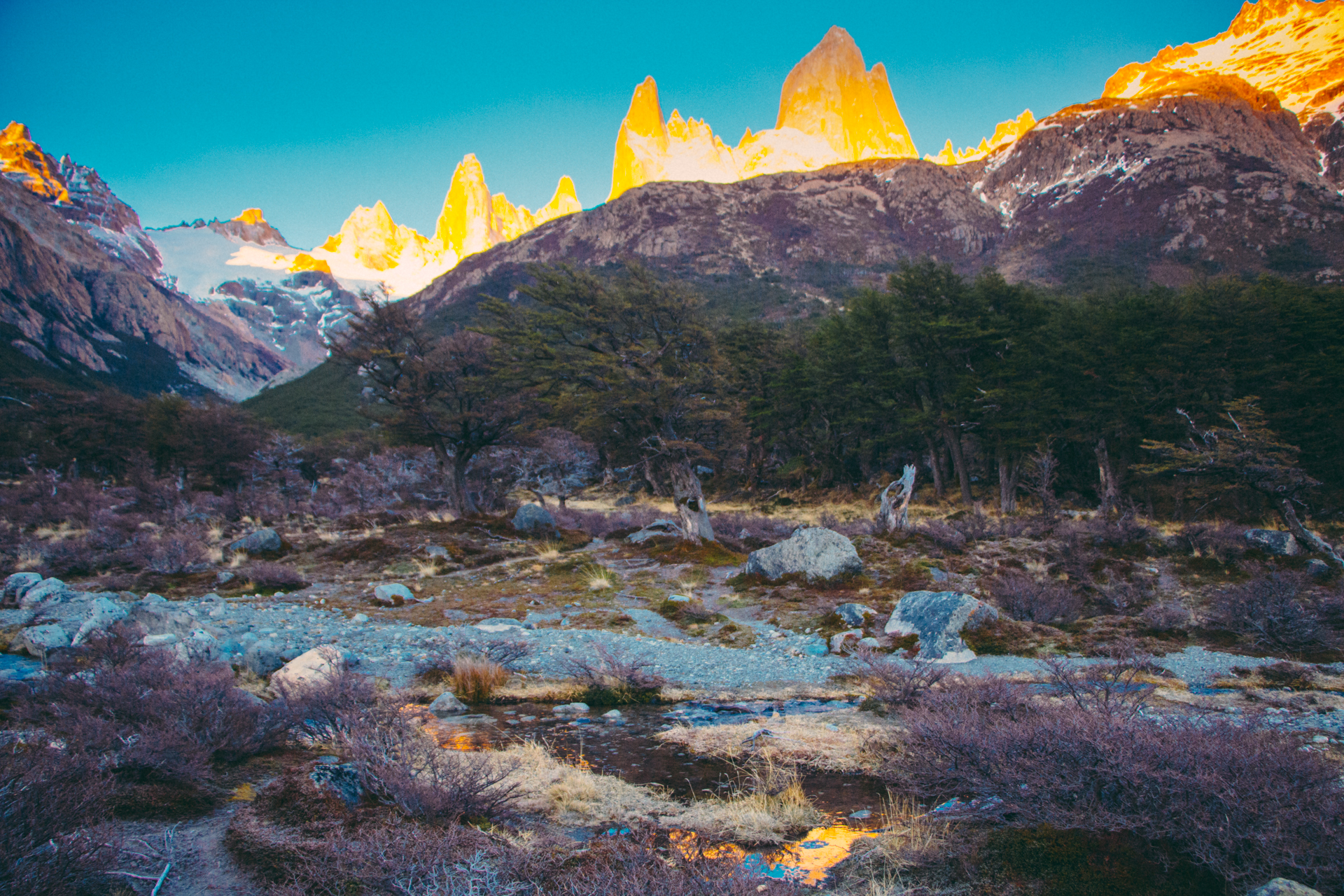 The next morning Alex woke up early at sunrise to go and take photos from the river to catch the golden hues hitting Fitz Roy whilst I gladly continued napping. After he was back he cooked scrambled egg and dippy soldiers. We left the tent behind and decided to do the last 1km of the hike to the main viewing point Laguna de los Tres. We thought it would be a quick up and down the mountain job. 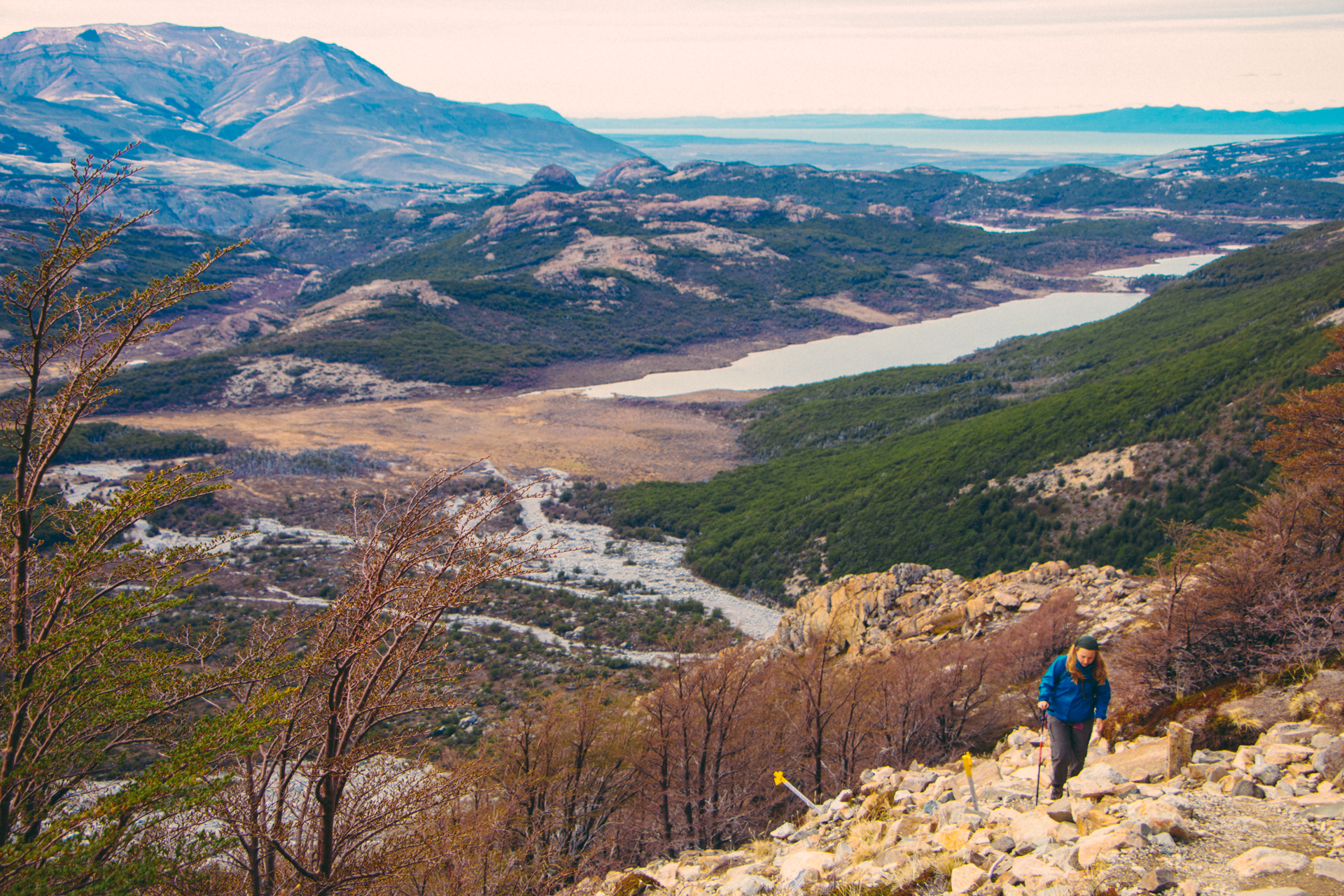 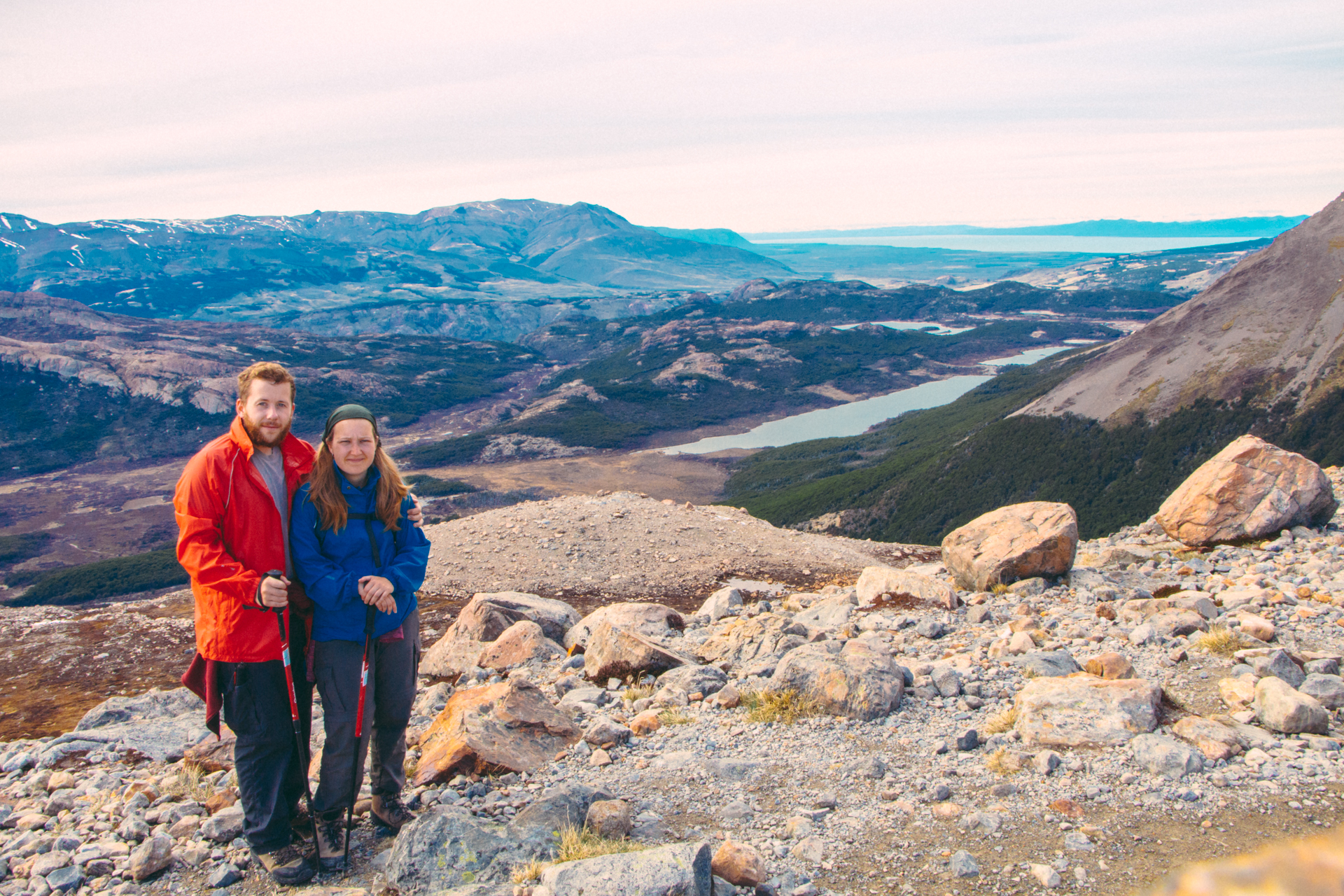 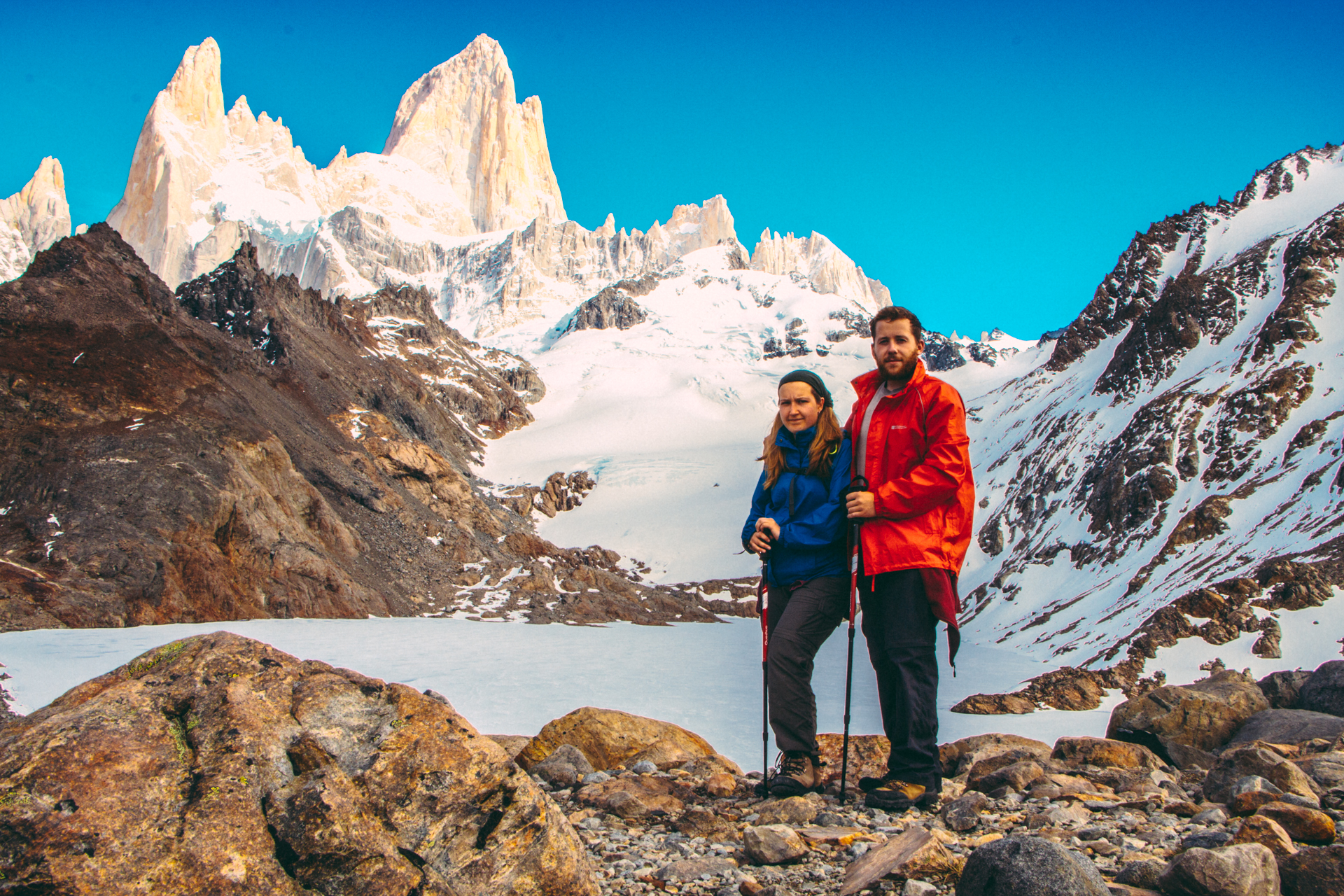 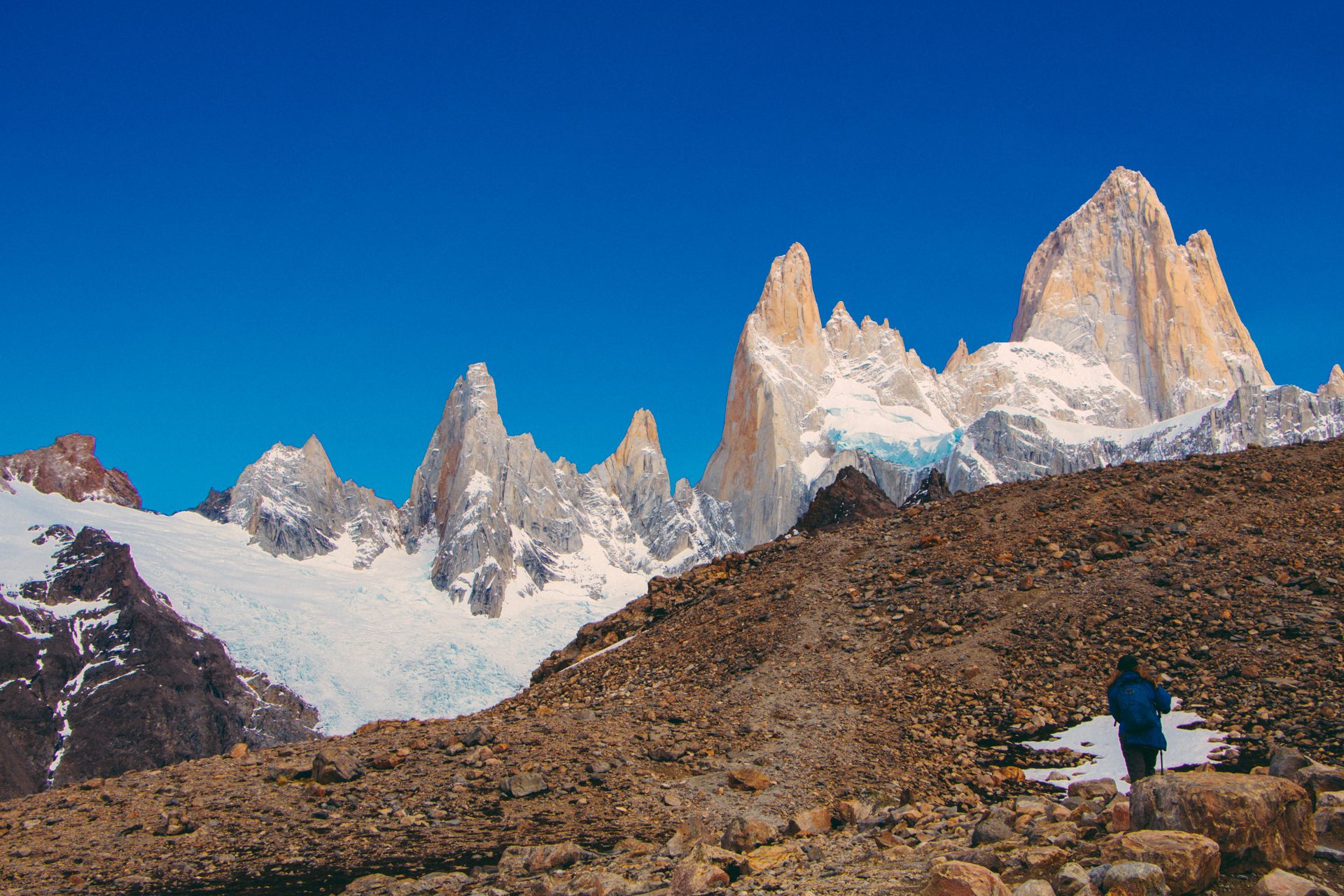 How wrong we were! The trek was the hardest thing I’ve ever done, there was rock climbing involved. It took us 2 hours to get to the top. It was a 400m gain of altitude over 1k, giving it an average incline of 40%! But it was worth it, the beautiful view of the lagoon on the top of the mountain was frozen. It was also peaceful because we were one of the only ones there.
The walk down took longer only because I hate going down hill. We finally got to the bottom knackered (well I was) and started on the chore of taking the tent down and packing up the gear for the additional 9km walk back to town. The walk back was pleasant and took half the time than the first hike to the campsite possibly because we were lighter and were on a mission to get back to have a nice shower. 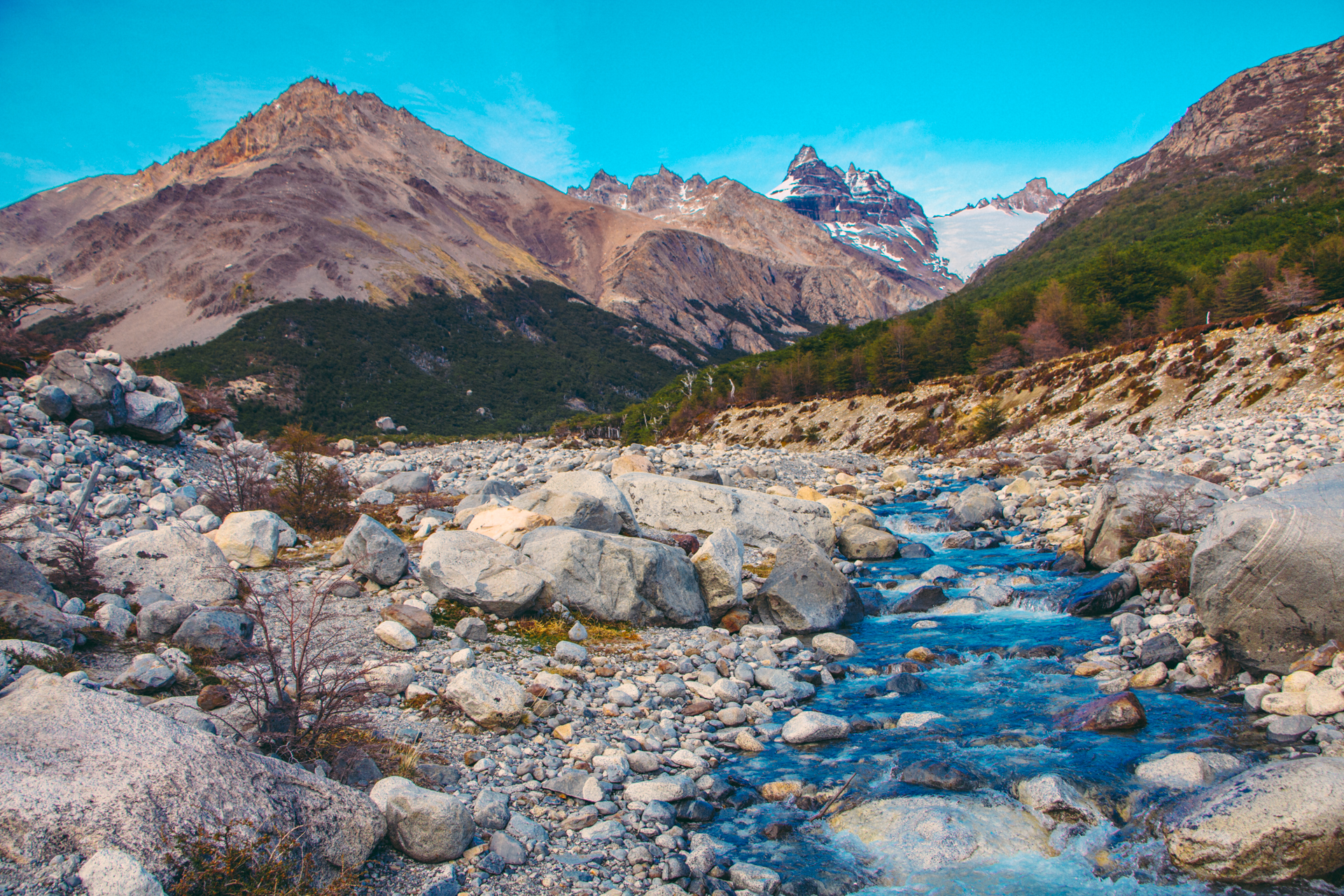 Just as we neared the bottom we met our American friends (Chase and Ashley) that we initially met in Puerto Madryn, and then tagged along with to El Calafate. However in El Chalten we had gone to different hostels due to bookings and said our goodbyes, so we never expected to see them again in our lives, it was an odd experience bumping into them again with the huge number of routes and paths we both could have taken through the mountains.

When we finally got back the hotel owner let us know she was moving us next door to a nicer hotel still as she had had a huge 30+ group booking, it was nice and I think we were the only ones there! After unpacking our camping gear and returning it to the rental store we headed to dinner for a relaxing finish to the day before heading back to El Calafate in the morning. 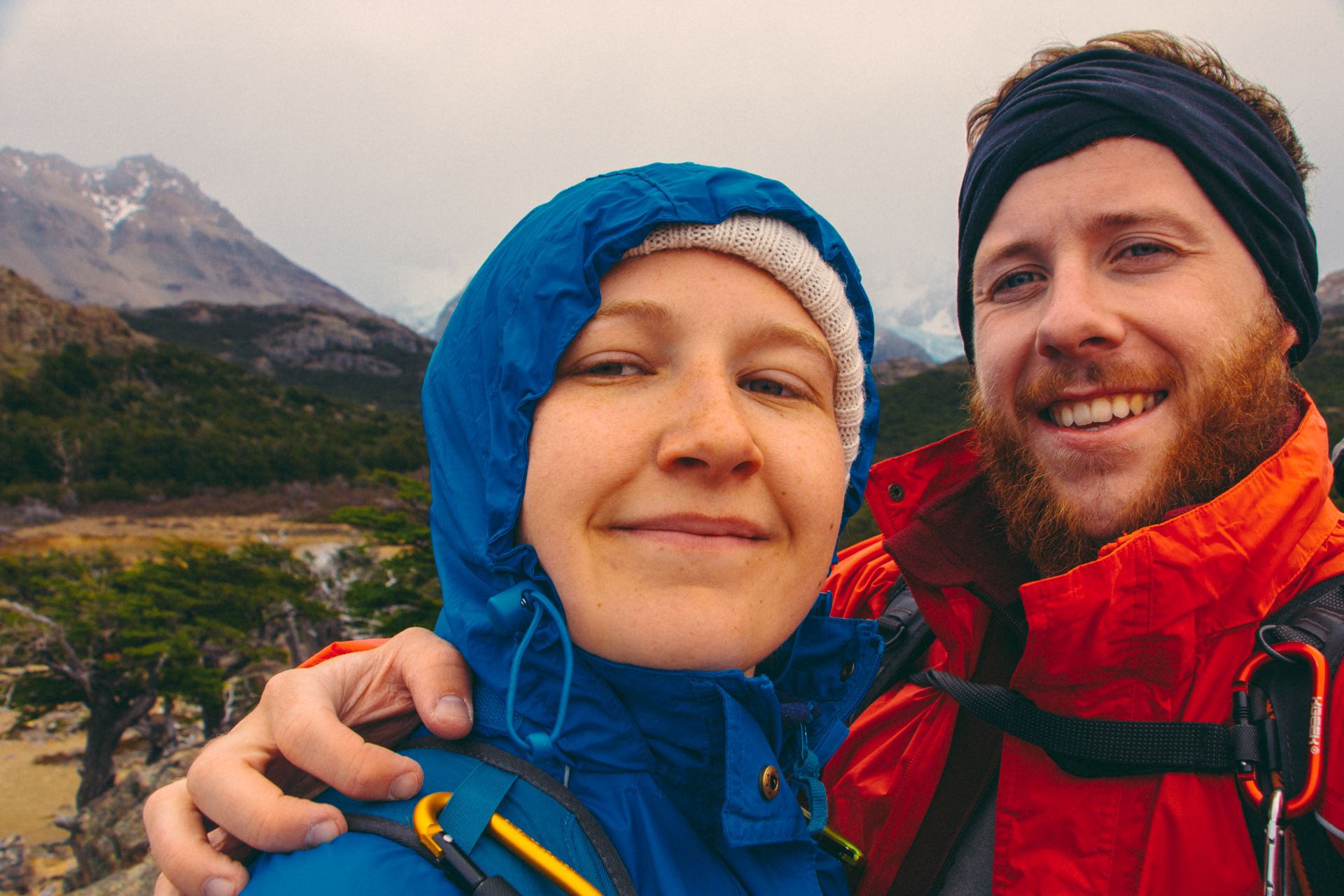