North of Thailand – Bangkok and all the Chiang’s

From the beautiful Southern Islands of Thailand we headed inland to spend a couple days in crazy Bangkok. It was really busy and I didn’t think it felt very homely, it was an urban jungle. We spent the first day there in the only “hipster” place we could find which was the largest market I’ve ever been to in my life, I bought these cool pumps and the typical tourist Thai trousers. Alex bought some incense and some shoes. We walked for hours and happened to stumble on the animal market which was the most upsetting thing I’ve ever seen, there were so many bags full of tropical fish, cages full with living tortoises, frogs in boxes and birds in tiny cages. It worries me the lack of animal welfare here, I felt the need to free them but you can’t comprehend the number of animals that were there, it was so tragic. 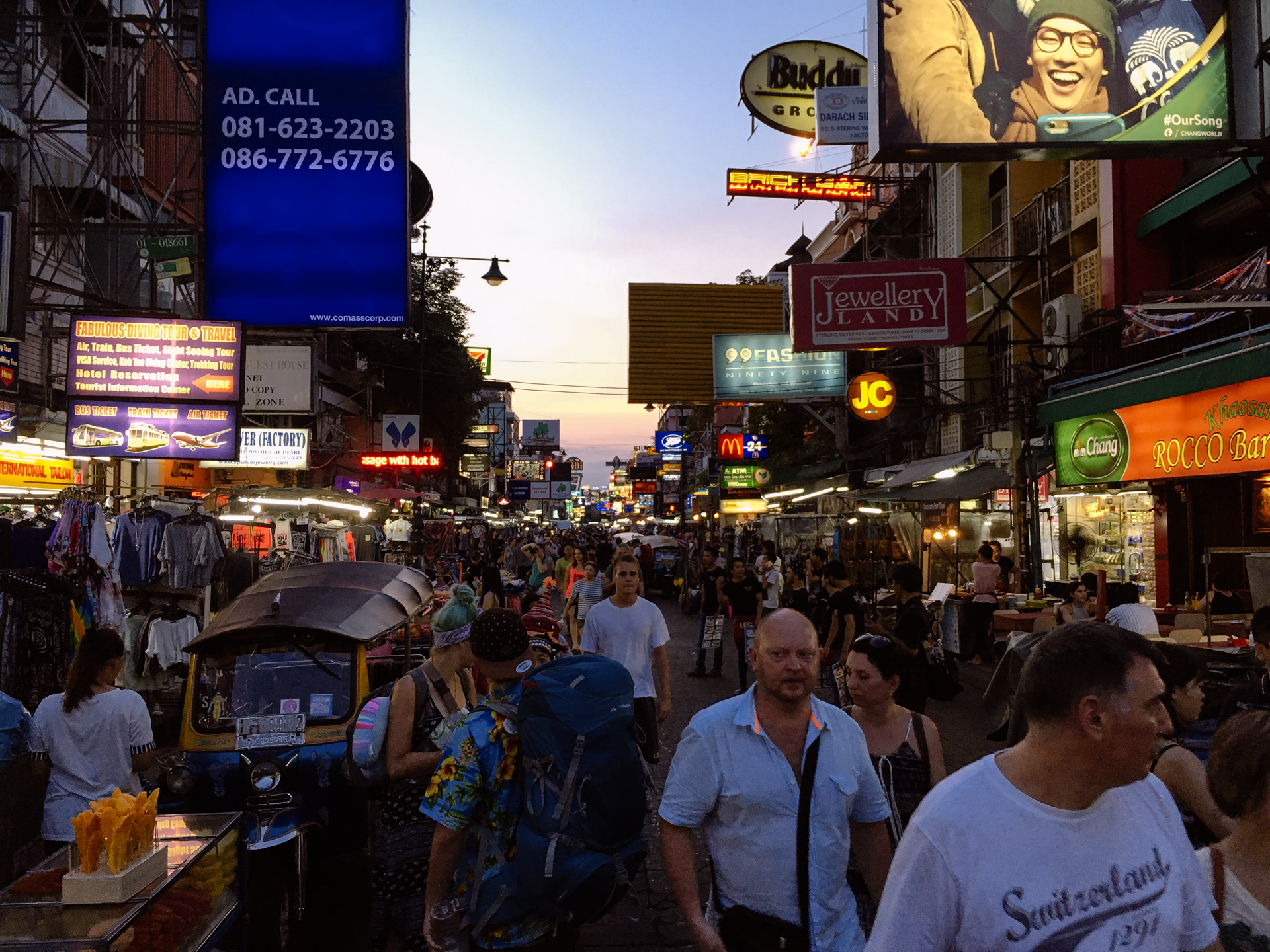 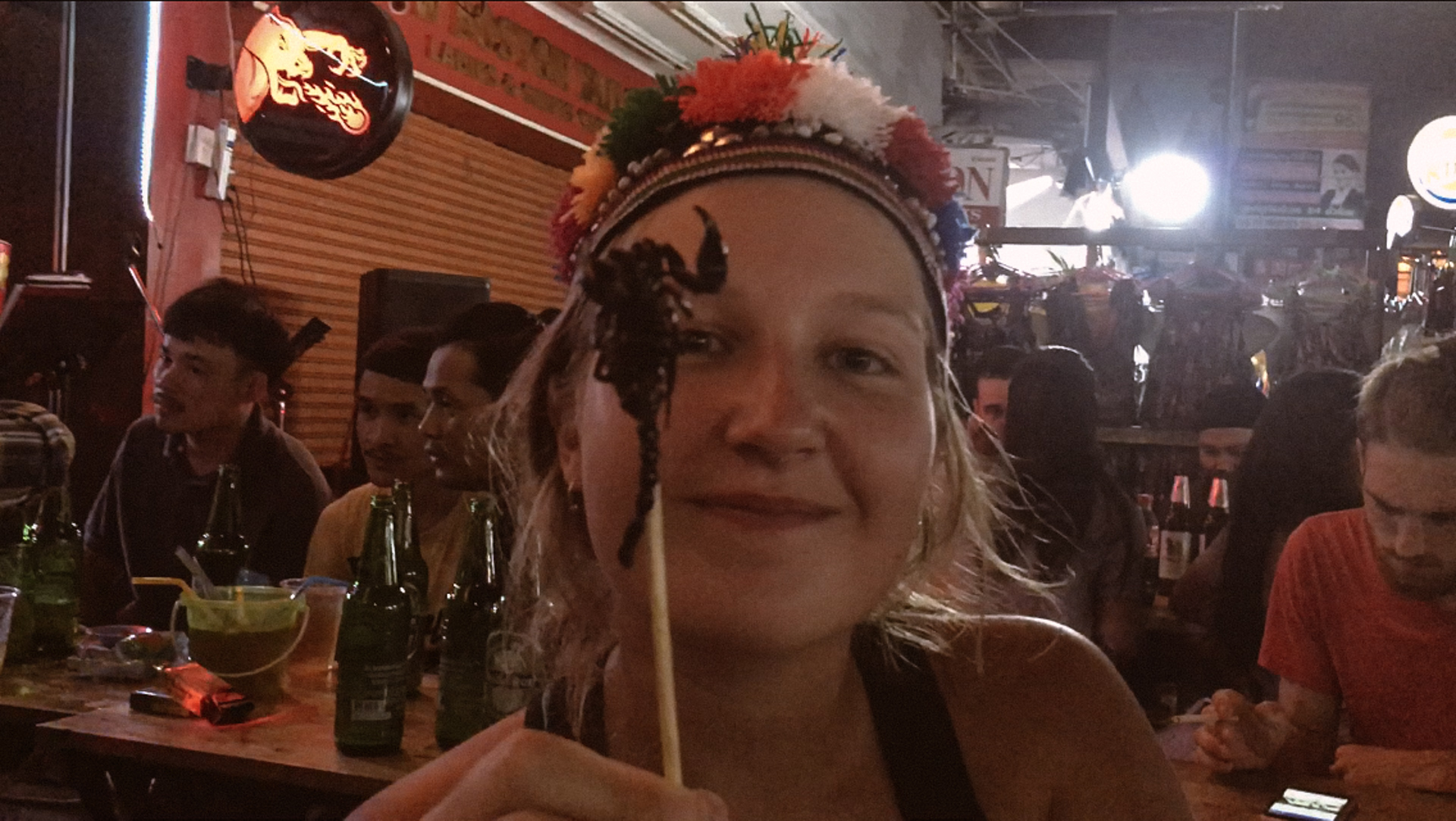 That night we decided to watch the Welsh rugby game and walked up and down Khao San Road until finally managed to convince a bar to show the game — and proceeded to watch Wales lose and get drunk.. and apparently eat scorpions (which I don’t remember.. but there’s photographic evidence I guess). 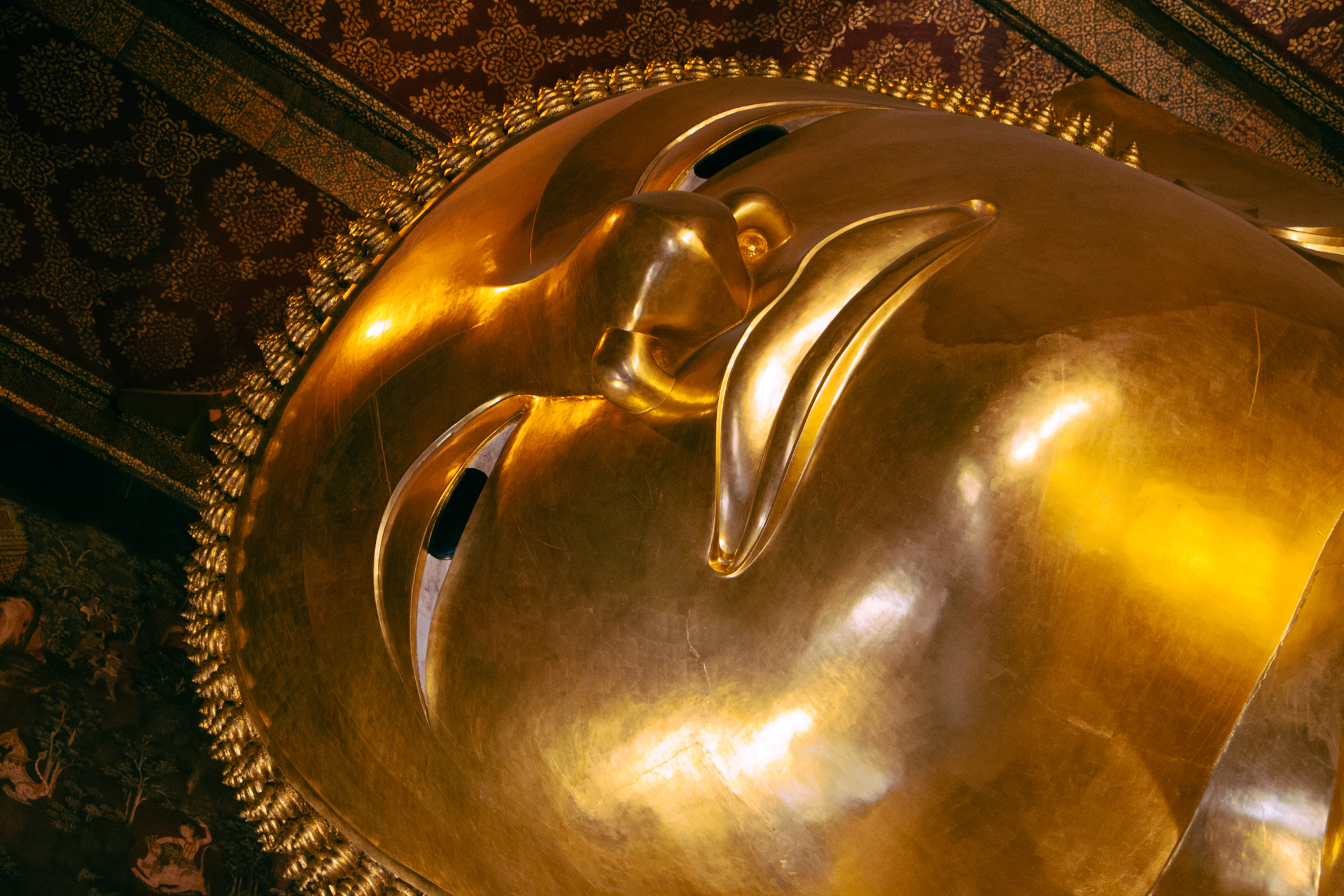 The next day (feeling rough) we spent the day temple hopping and getting ripped off by TukTuK drivers. We visited Wat Pho, the reclining Buddha, Wat Phra Kaeo and more. 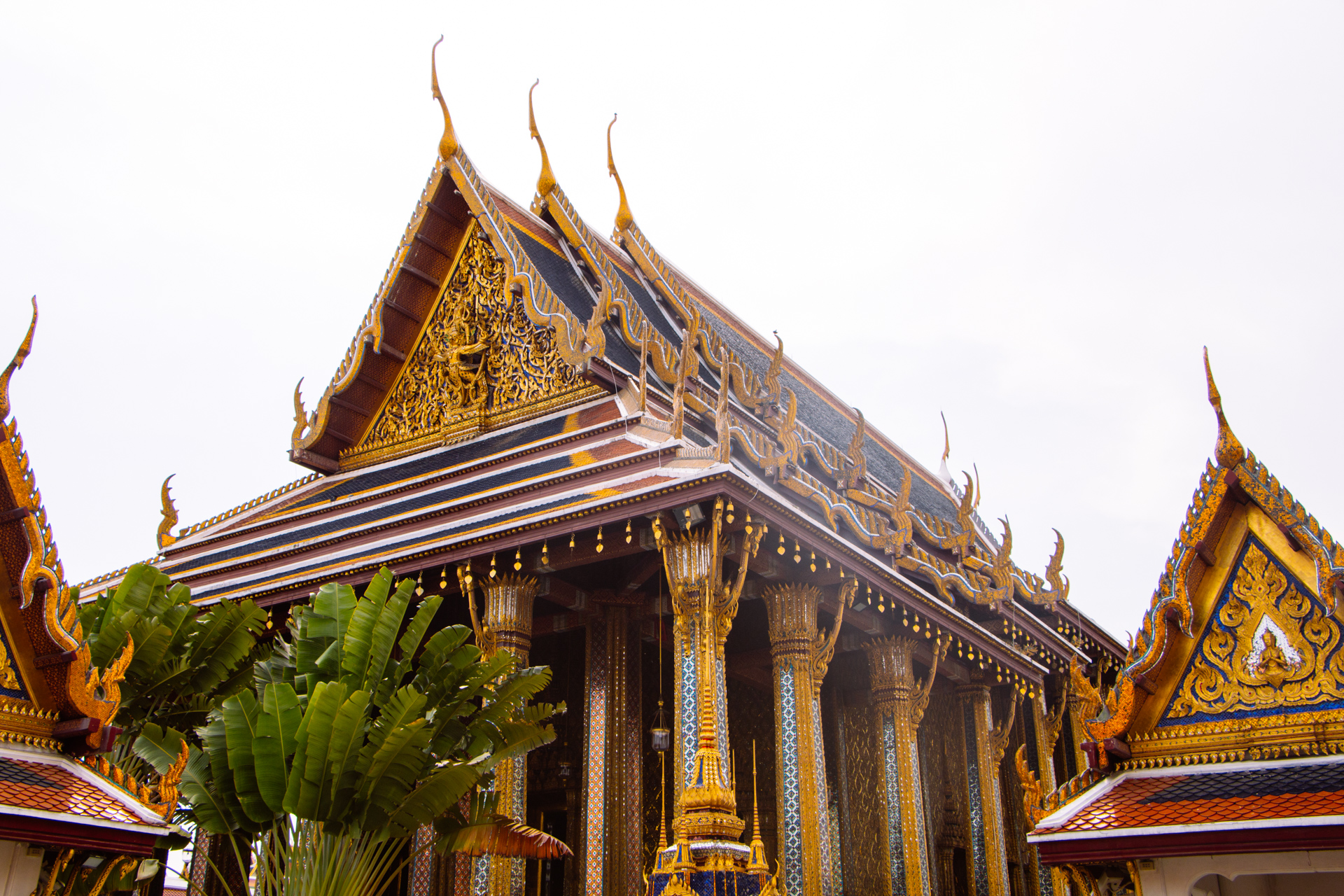 The temples are so lavish, so much gold and emerald, it was super cool to see.
On the last day we walked around the area of our hotel until we had to leave for the airport. We said fairwell to Catrin while she headed home and we caught our flight to Chiang Mai.

Chiang Mai was a really nice city — much nicer than Bangkok. We initially wanted to spend three nights here but ended up staying 10 nights. 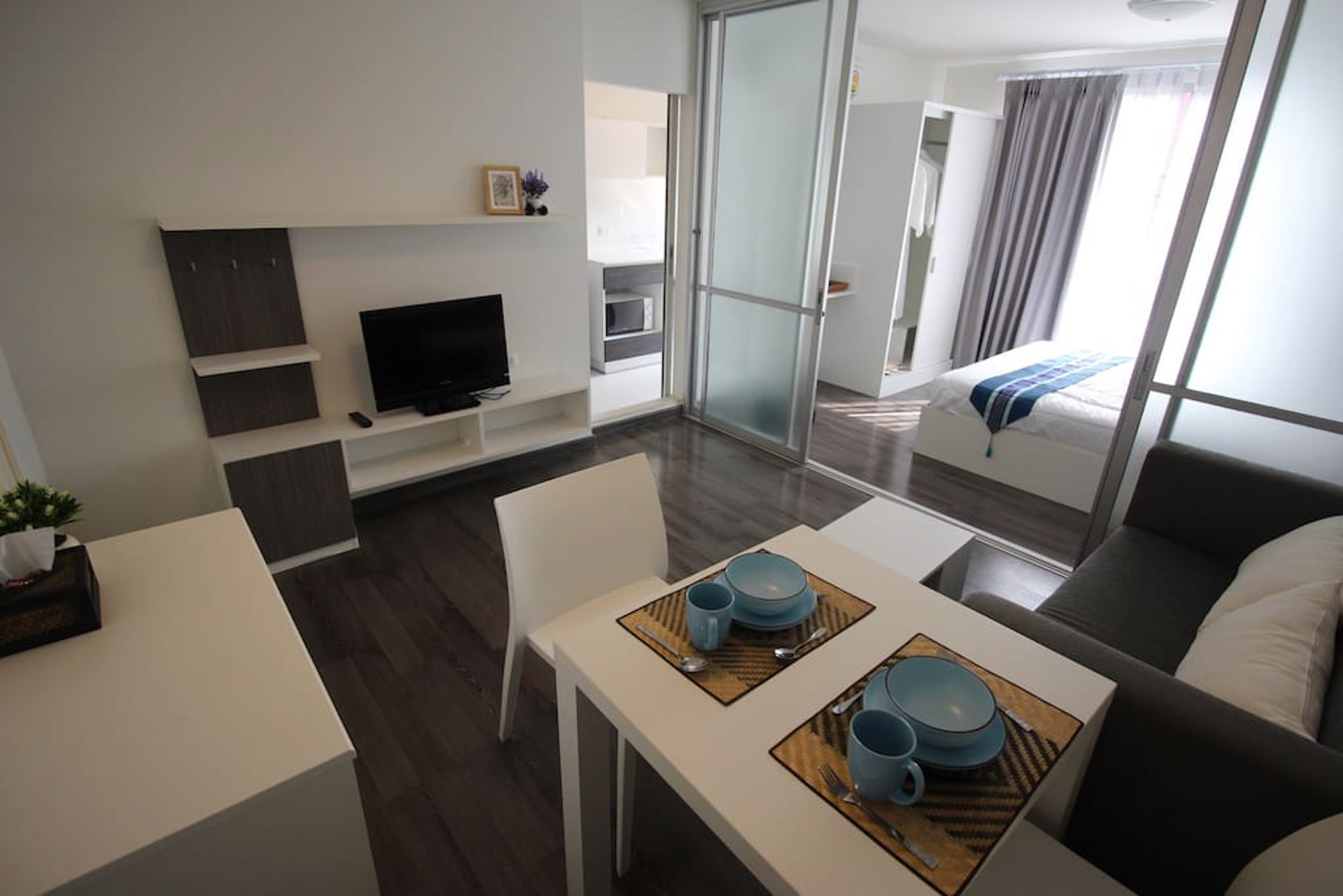 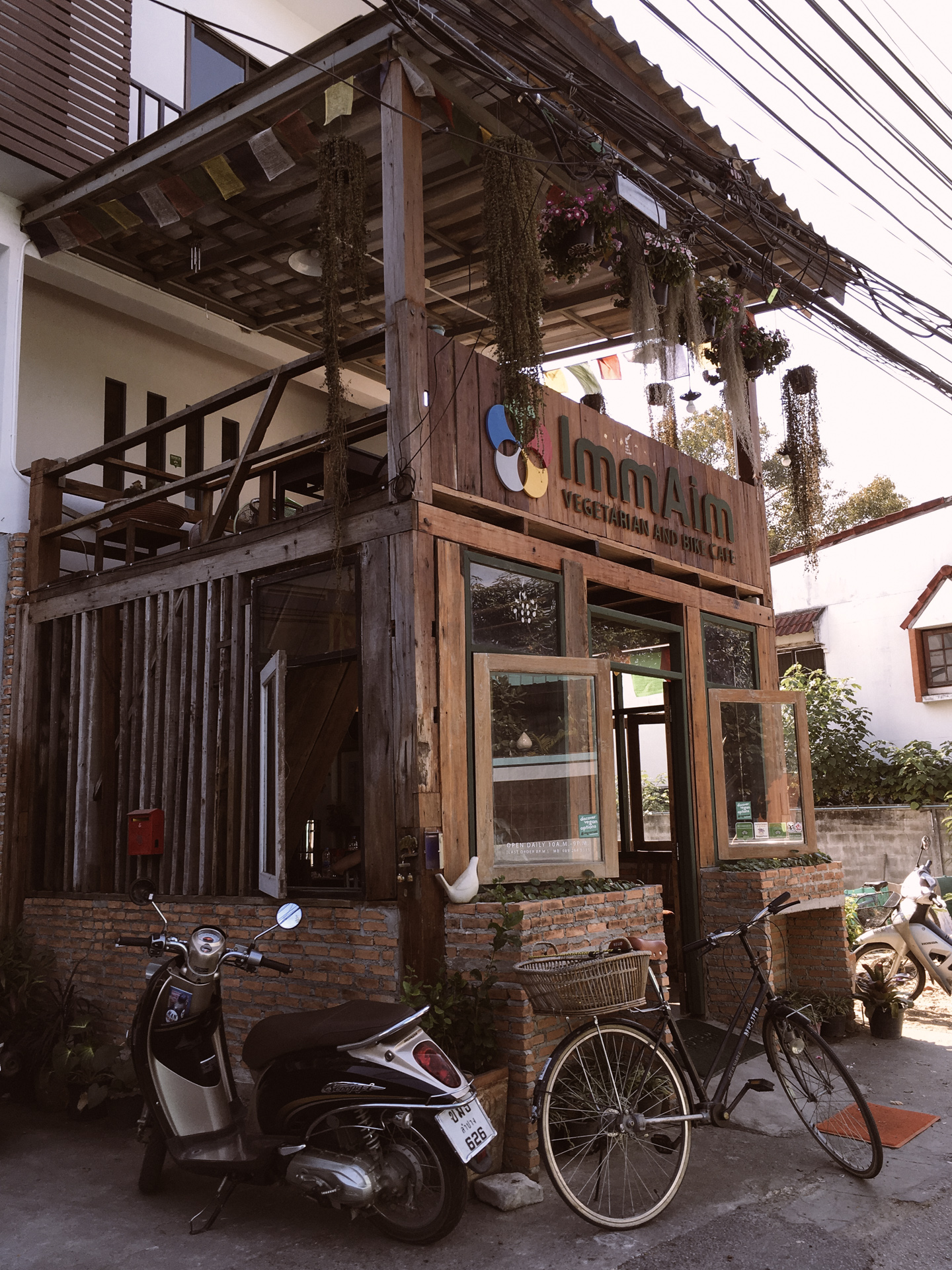 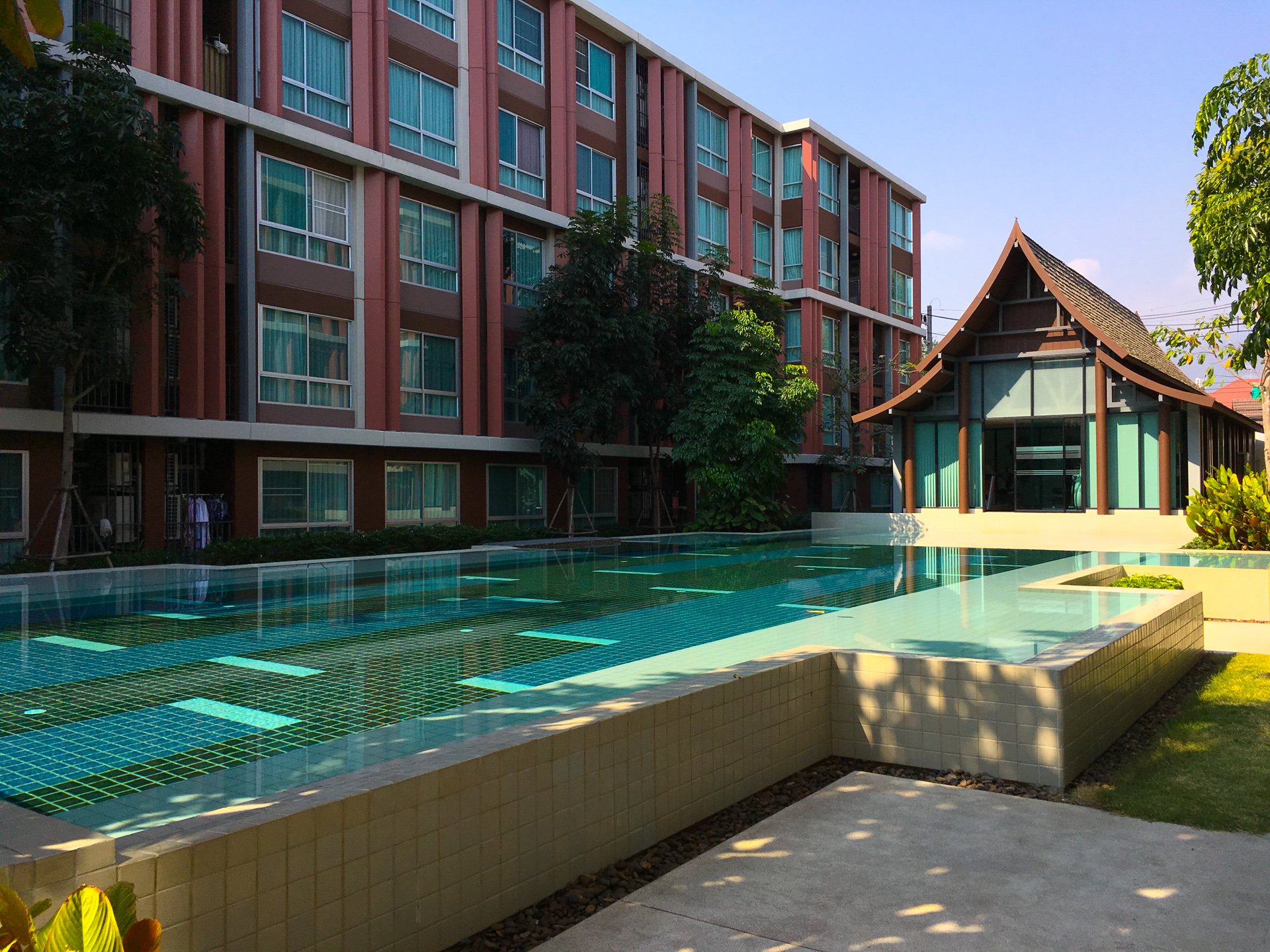 Alex and I loved it here, we spent days eating in lovely vegetarian restaurants, walking around the centre and temples. We went to the gym some days and swam a lot in the pool of our apartment. 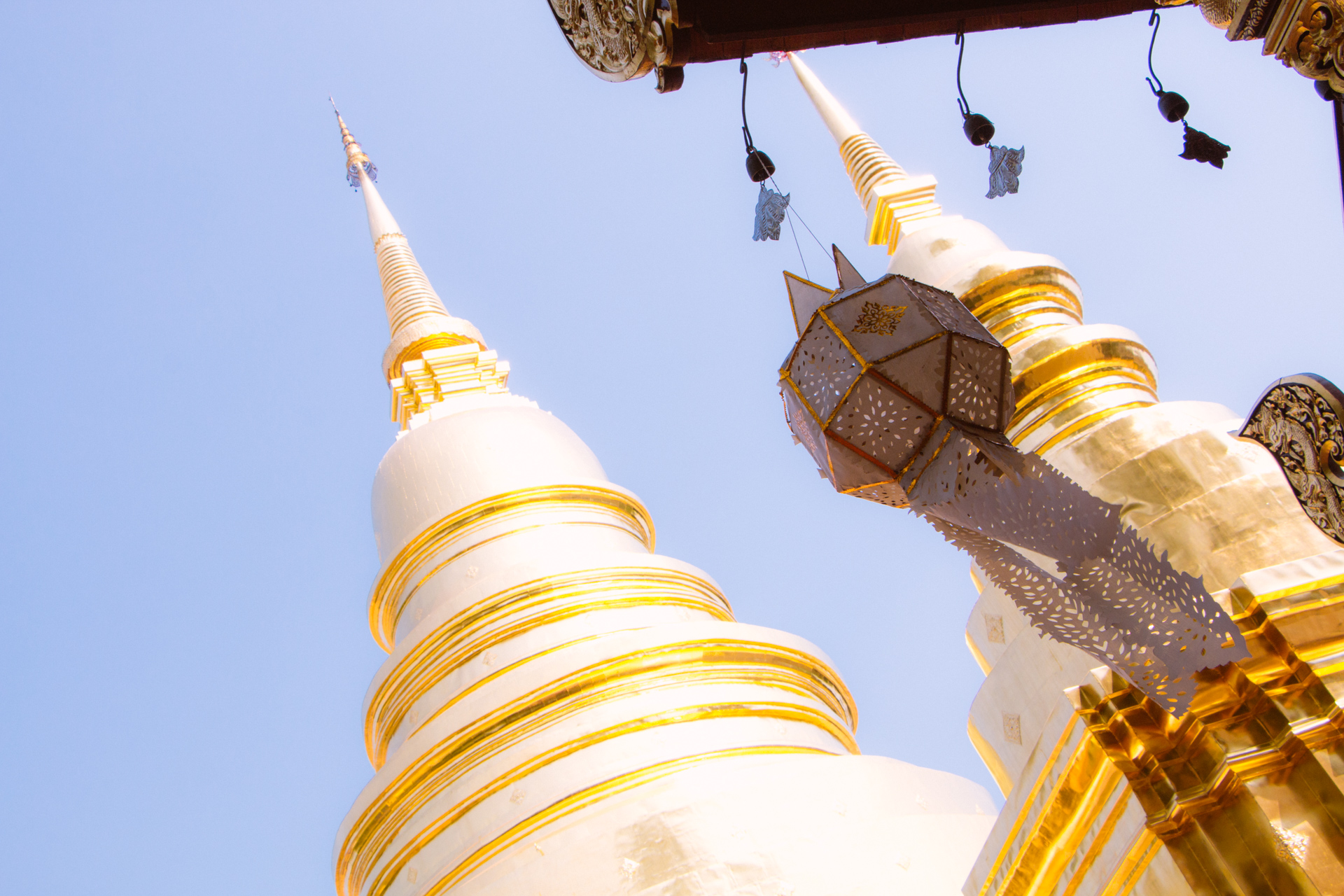 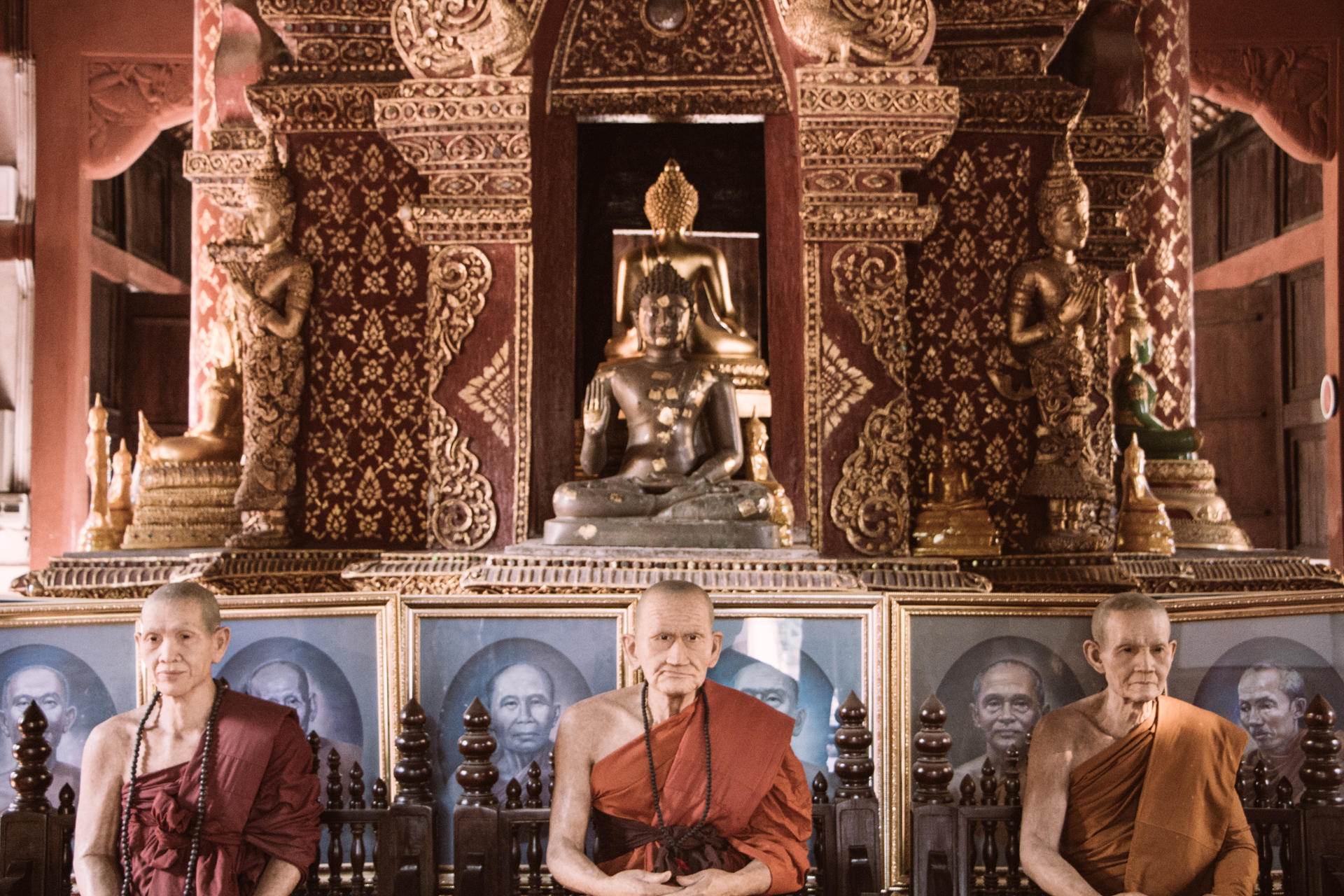 We also had the opportunity to speak to Buddhist monks during a scholarship programme which helps them learn English. We met a really friendly monk who spoke for a long time about Buddhism, his family, Buddhist life and a bunch of other things – it was inspiring to hear. In my opinion if everyone lived by Buddhism, I feel the planet would be a happier place.

The highlight though was meeting the elephants in the sanctuary just outside the city, it was founded by an Australian back in the 90s and was one of the first to open in the area. 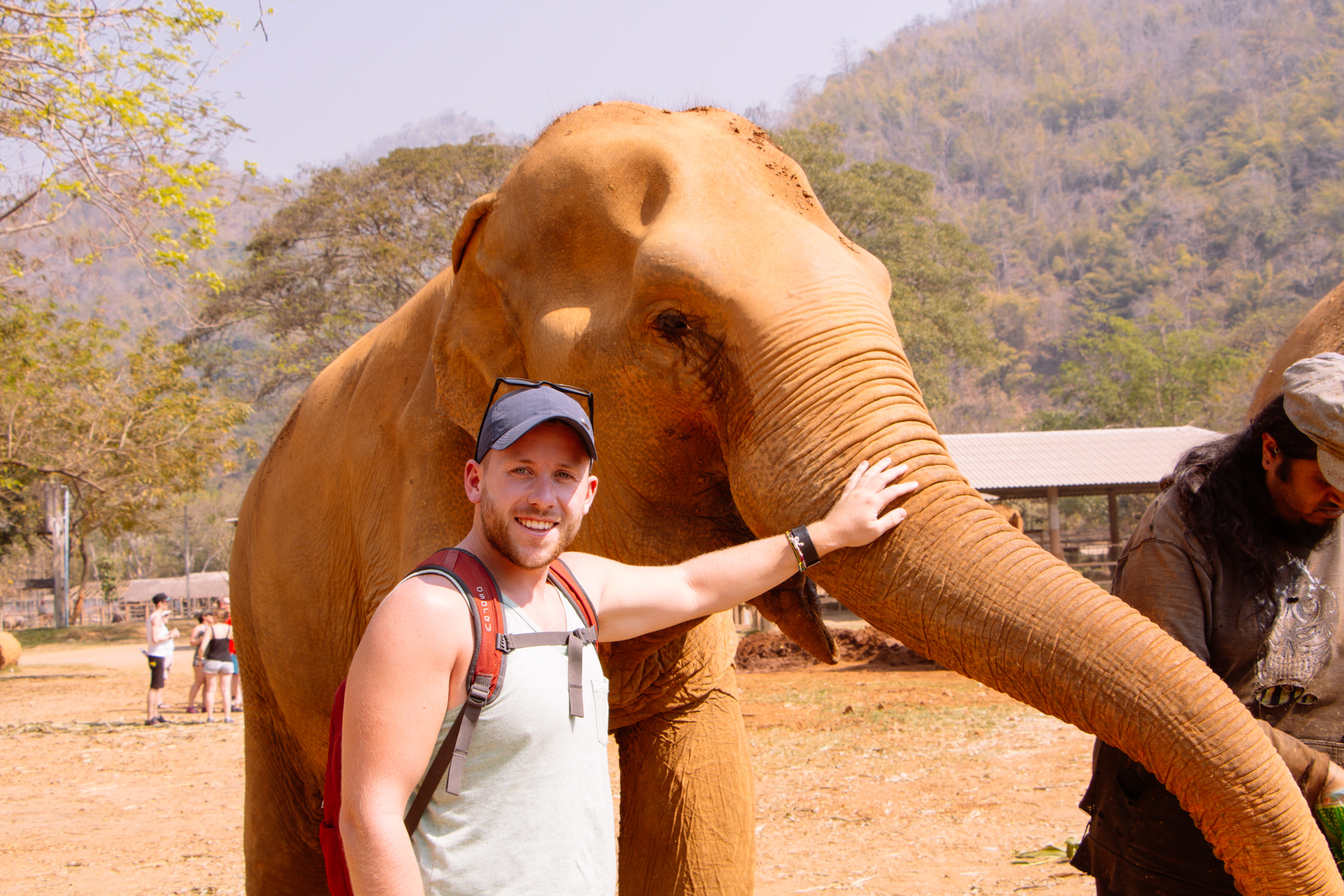 It is one of the only sanctuaries that is humane; rescuing animals from poor environments and now treats them well, with a strict no riding policy – sadly many tourists come to Thailand with riding elephants as high in their agenda, the elephants simply can’t handle weight on their back. We met elephants with broken backs from tourists riding them, broken legs from logging and exploded feet from standing on land mines from the civil wars in various areas of South East Asia. 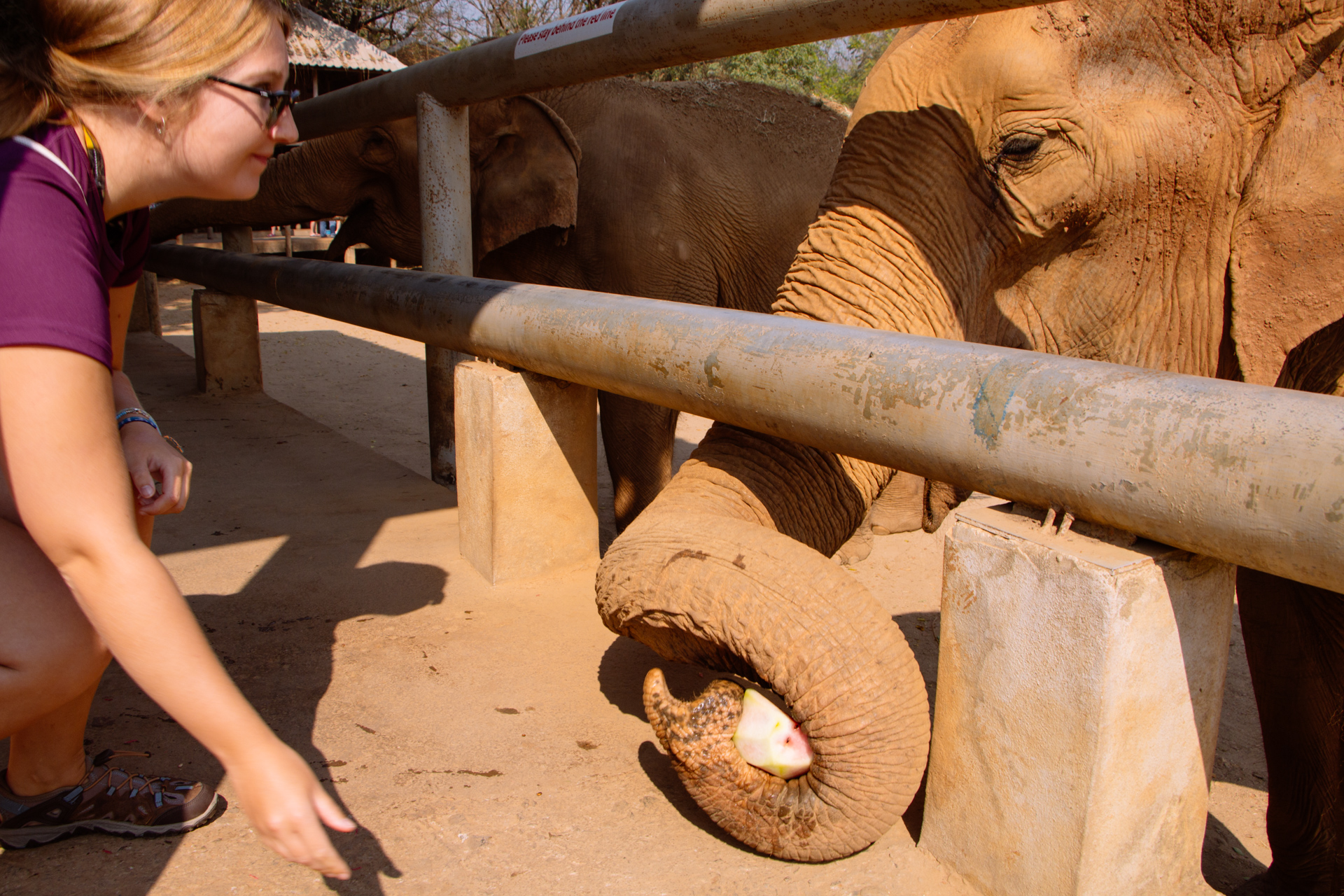 It was a real crazy moment to feed them, they’re such lovely giants, we only met females because males are too aggressive and they release them back to the wild, sadly the female elephants can’t be re-released because they can’t survive, a lot of them die in the sanctuary. 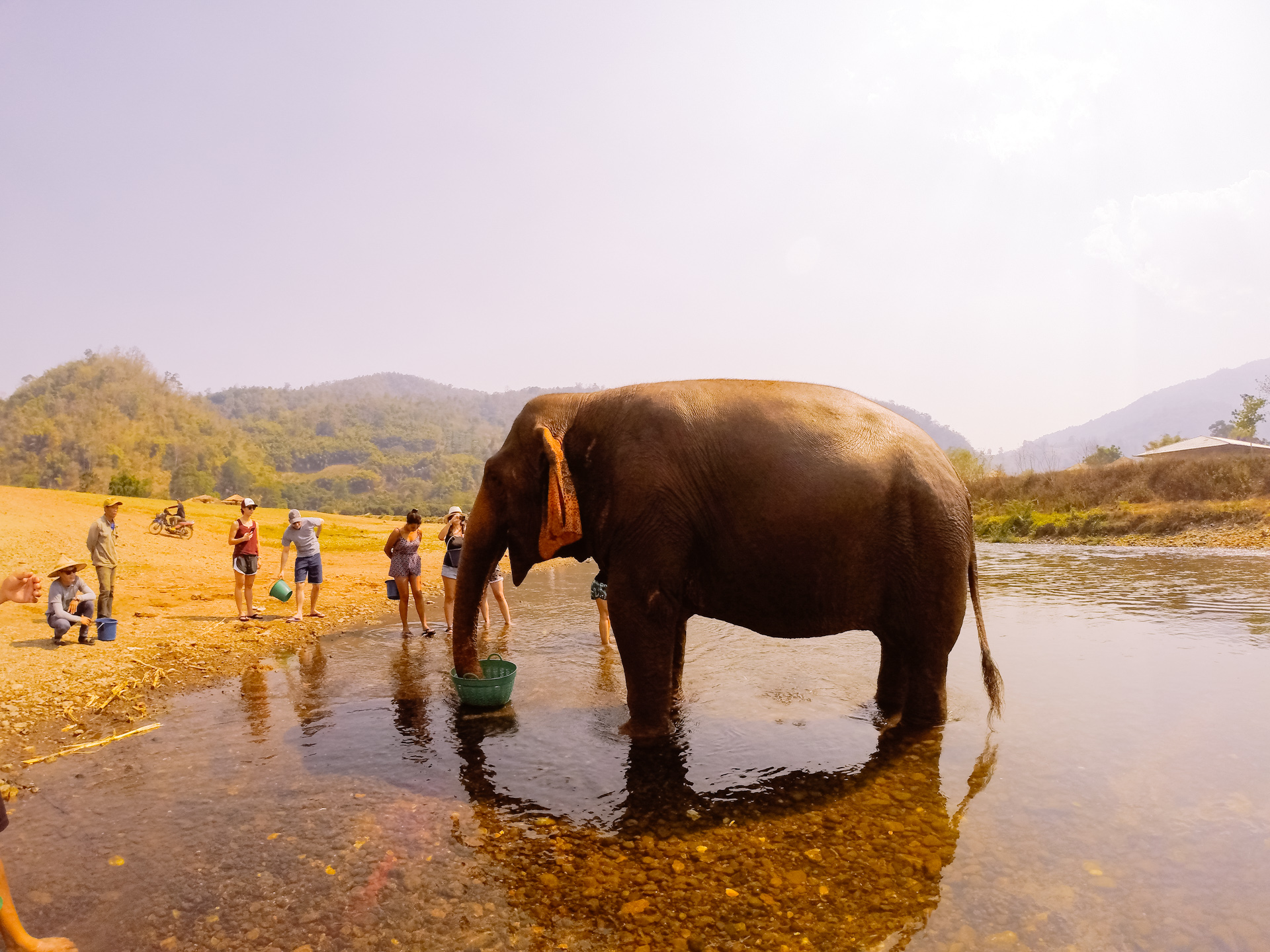 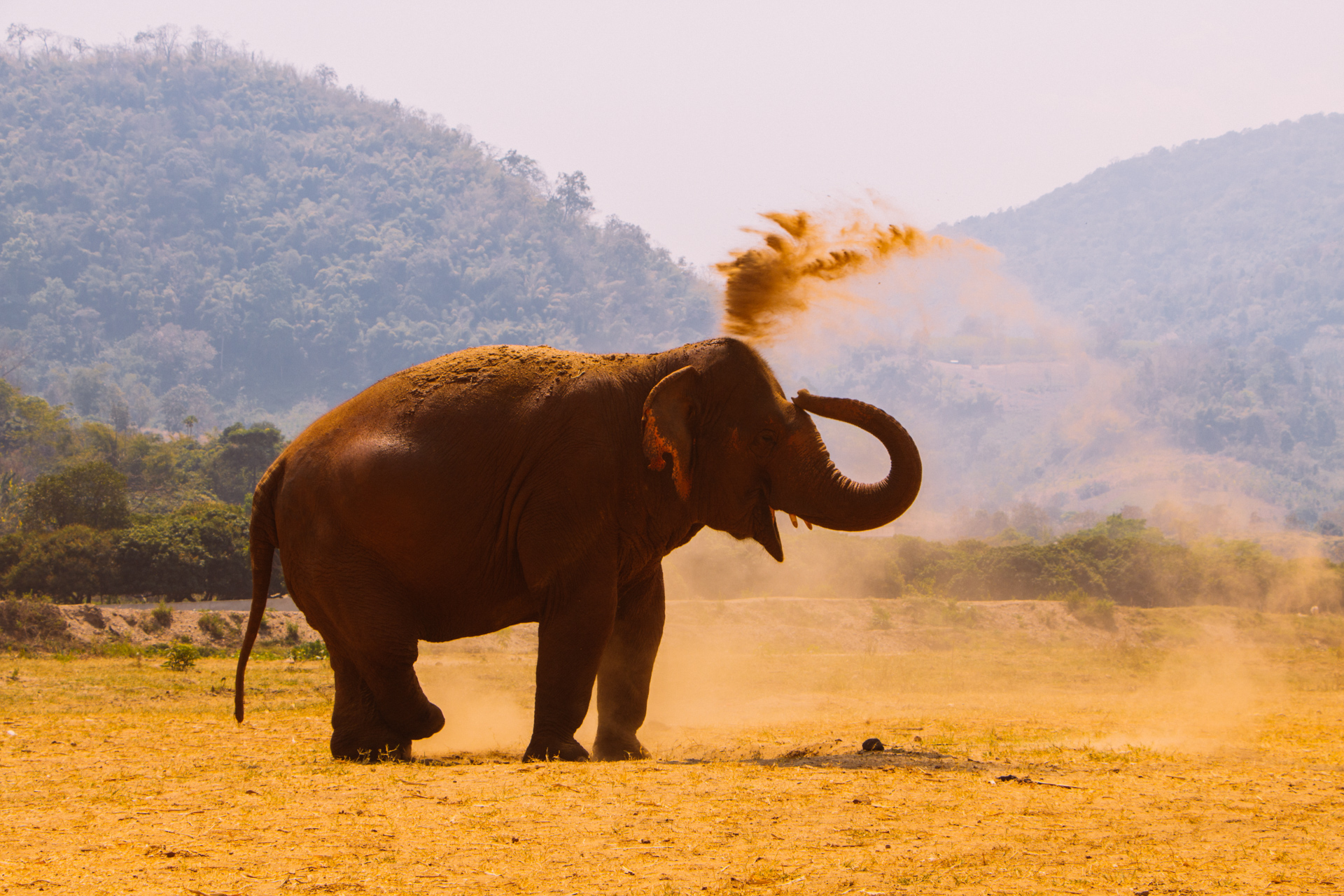 We also got to bathe a elephant which was cool even though as soon as she was clean she walked straight into a mud pile and had a roll around.
In the sanctuary they also adopt stray dogs and cats so it cool to be surrounded by animals. It was an amazing experience! Definite highlight!

Chiang Rai was our penultimate stop, our hotel was situated near a river, with a lot of French influences. We hired a bike and cycled all around – it felt a bit like being in Europe. Alex thought that it would be a good idea to cross the bridge to get to the other side of the river, where there was supposedly a really nice cafe. What he failed to say that the bridge to get over to the other side was more like a motorway. 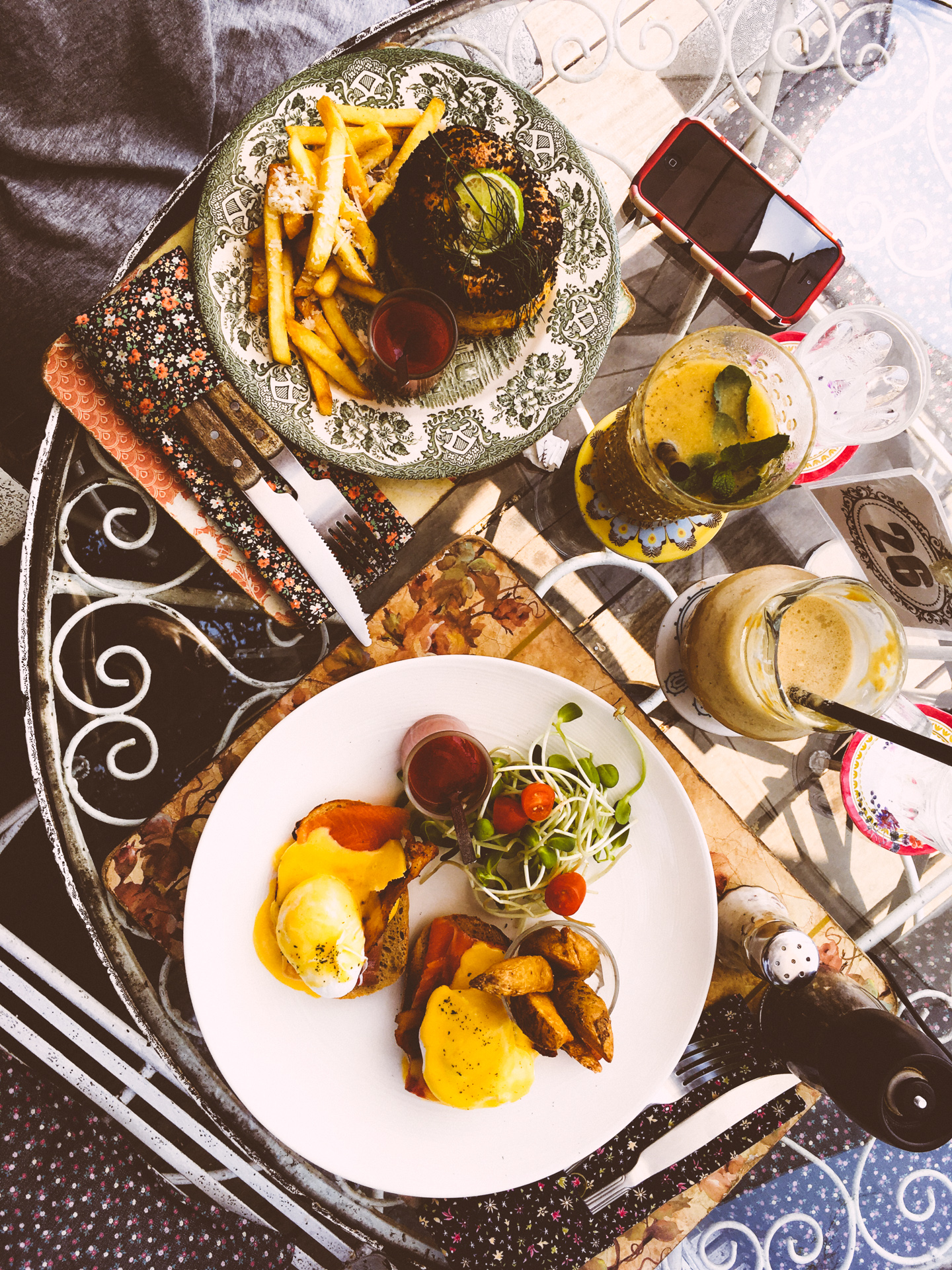 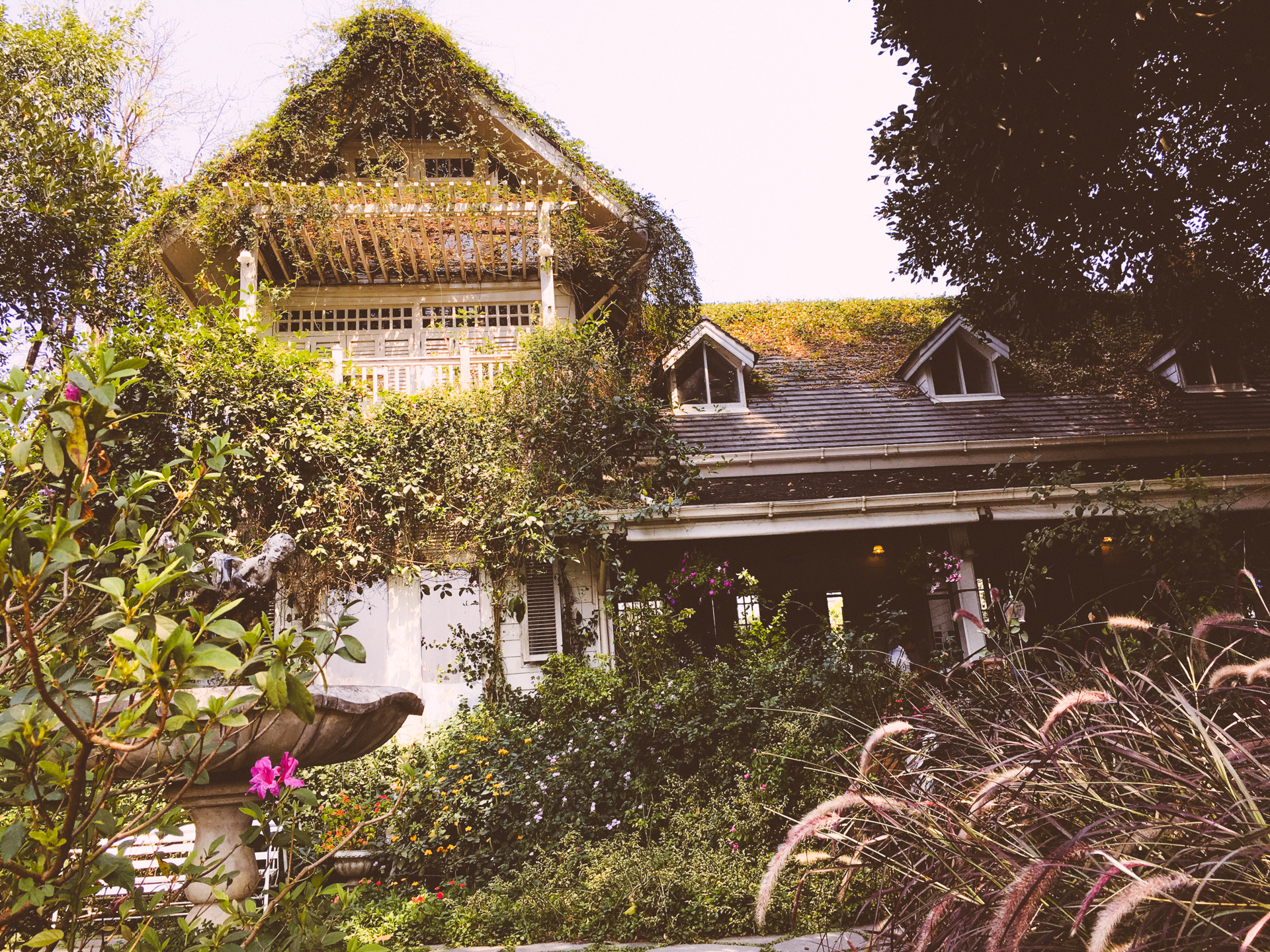 I was pretty scared trying not to get run over. We eventually made it and the cafe was lovely, it had Victorian themed white garden furniture and we sat in a Alice in wonderland type garden it was so peaceful. 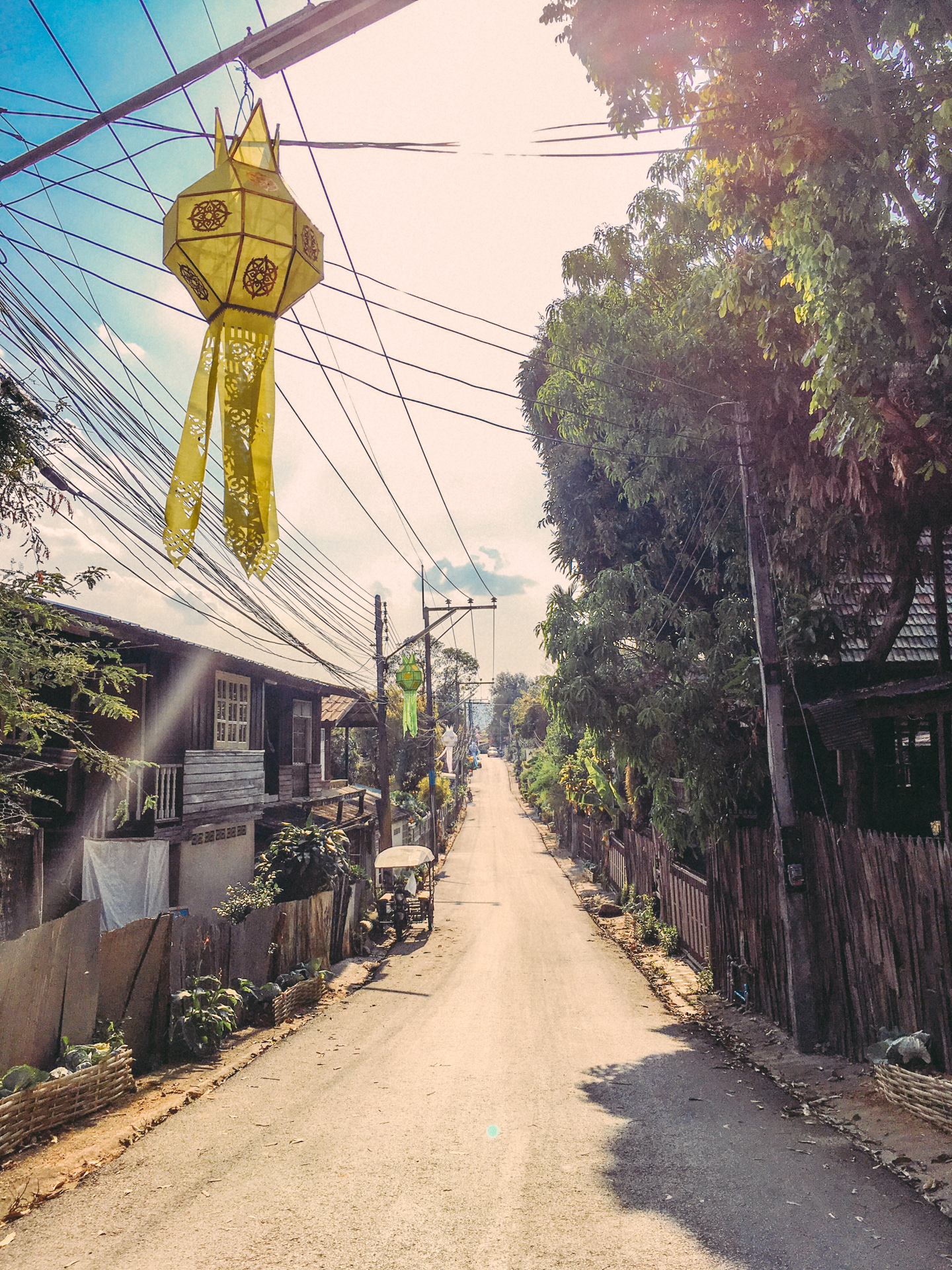 Chiang Khong was the last place in Thailand that we stayed in, we were only here for an evening but again it was a lovely place — there was a market all along the main road which we strolled along.

We stayed in a quite cool and modern hostel with great views – it was only about 4 stories tall but was just about the highest building around. In the morning we got a lift to the Thai/Laos border so we could enter, for the start of a new adventure on the Mekong River.