Alex and I really wanted to head to Ushuaia as our next destination however time was against us and we definitely did not have the right gear with us to go that far south. If I thought Puerto Madryn was cold Rio Gallegos was colder for sure.
We were only in Rio Gallegos for a total of two hours (we were waiting for our bus transfer) and it was super cold. In hindsight I wish I’d have appreciated how far South we were but I was too busy complaining about the weather! We were the closest to the Antarctic we probably ever will be.
The road to El Calafate was beautiful, surrounded by peaky mountains that were like the Swiss Alps. 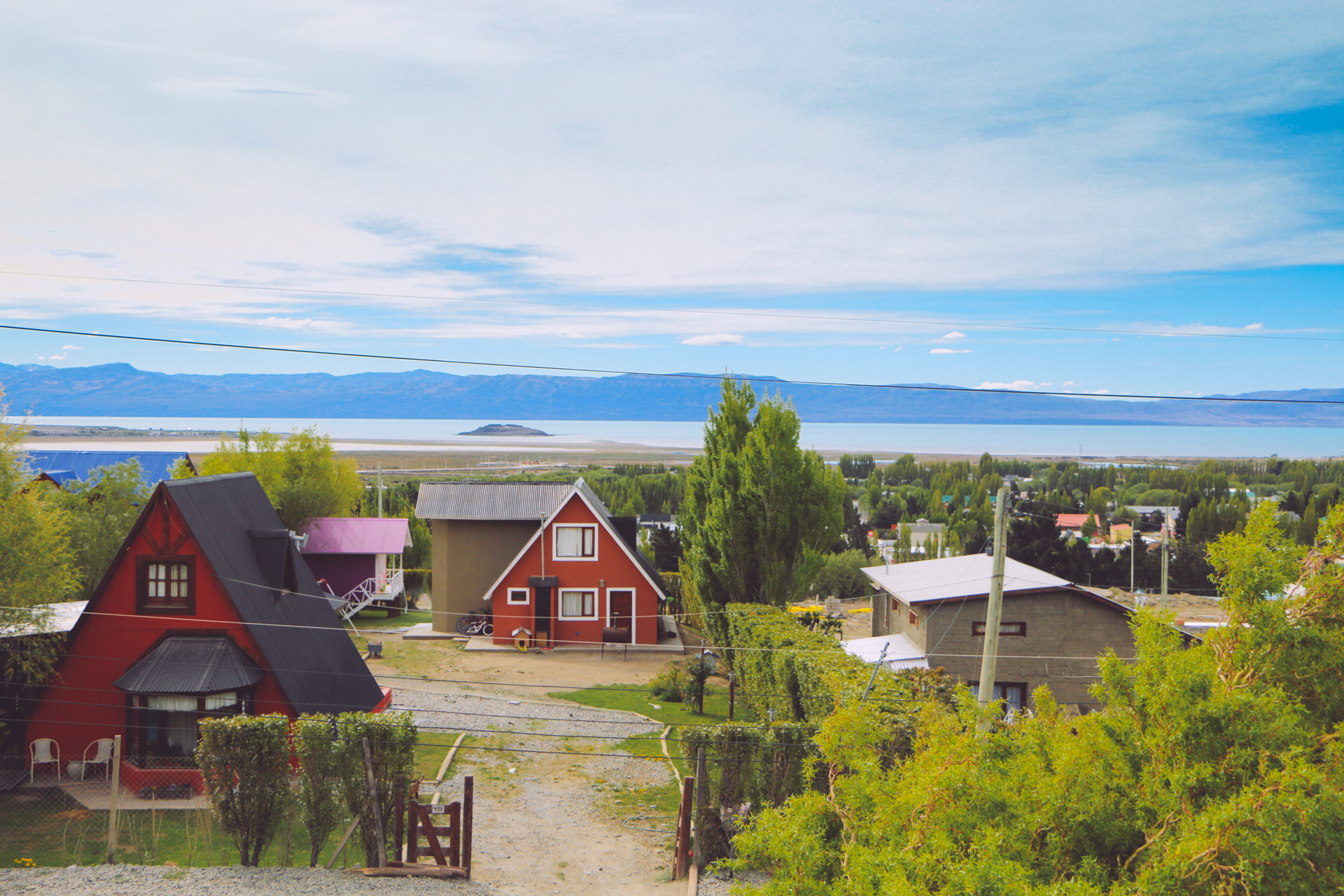 Our hostel was located on top of a hill and the view from our view was muy bueno. You could see an ice blue lagoons with the meandering mountains surrounding it from our window — a beautiful back drop for yet another BBQ. 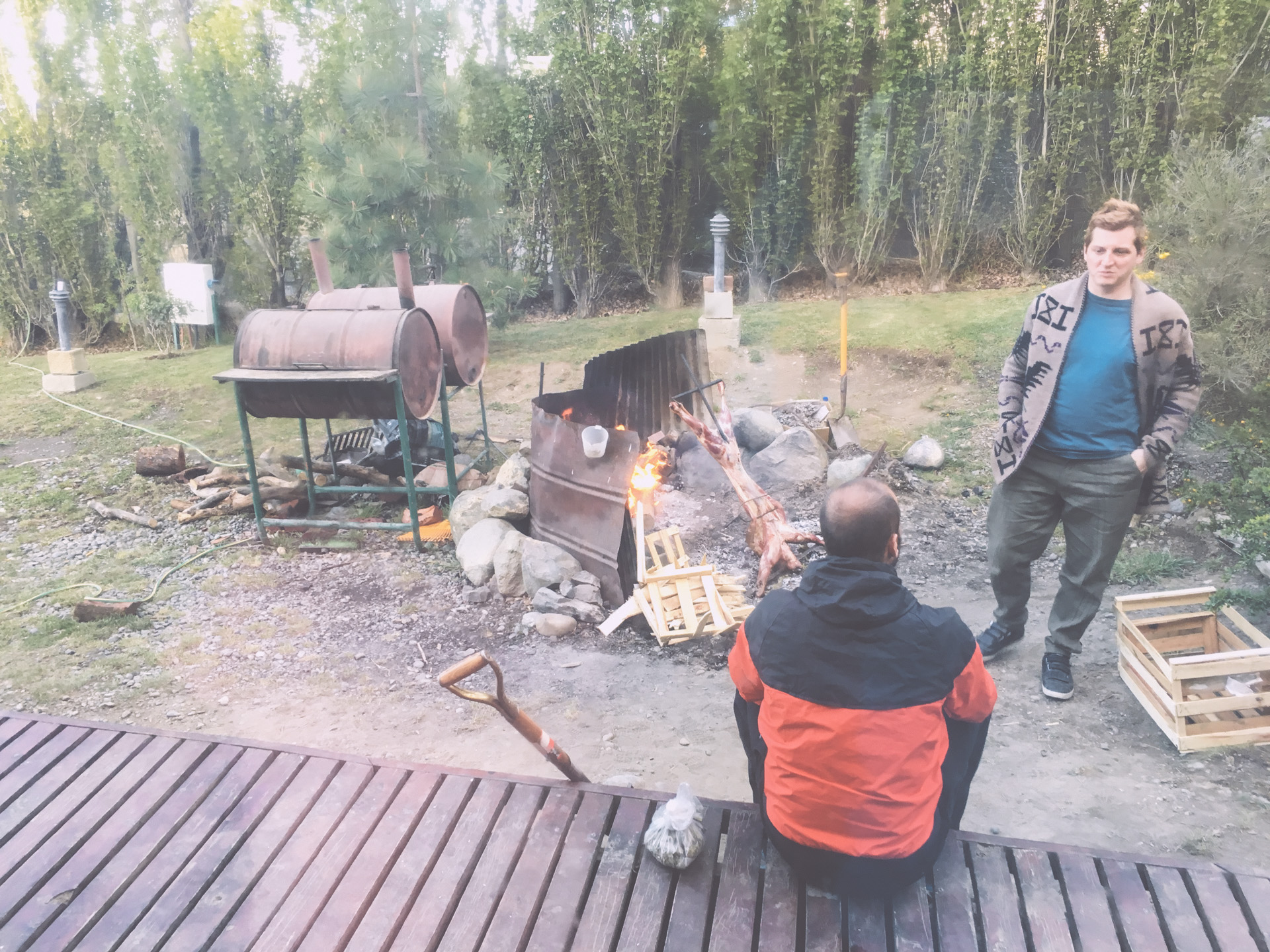 On our first night the hostel had a lamb and wine night. The poor lamb was cooked over a fire pit placed in a cross position. Looked like lamb Jesus, but apparently it’s a popular Argentinian tradition 🙁 . It was delicious to eat but I have to admit it’s not like Welsh lamby. The texture was a bit more like beef. I think it’s due to the grass they eat in these parts. It’s apparently drier so gives the lamb a less fatty texture. The evening was nice but a bit too hipster for the likes of Alex and I. When everyone sat around the fire, guitars and bongos came out and everyone started singing, we were done. It was time for bed!
The next day we met up with our Boston buddies Ashley and Chase again. We read that going to the national park was cheaper to go to via remise instead of an organised bus, so that’s what we did – and it worked out perfectly, we saved about 50%. 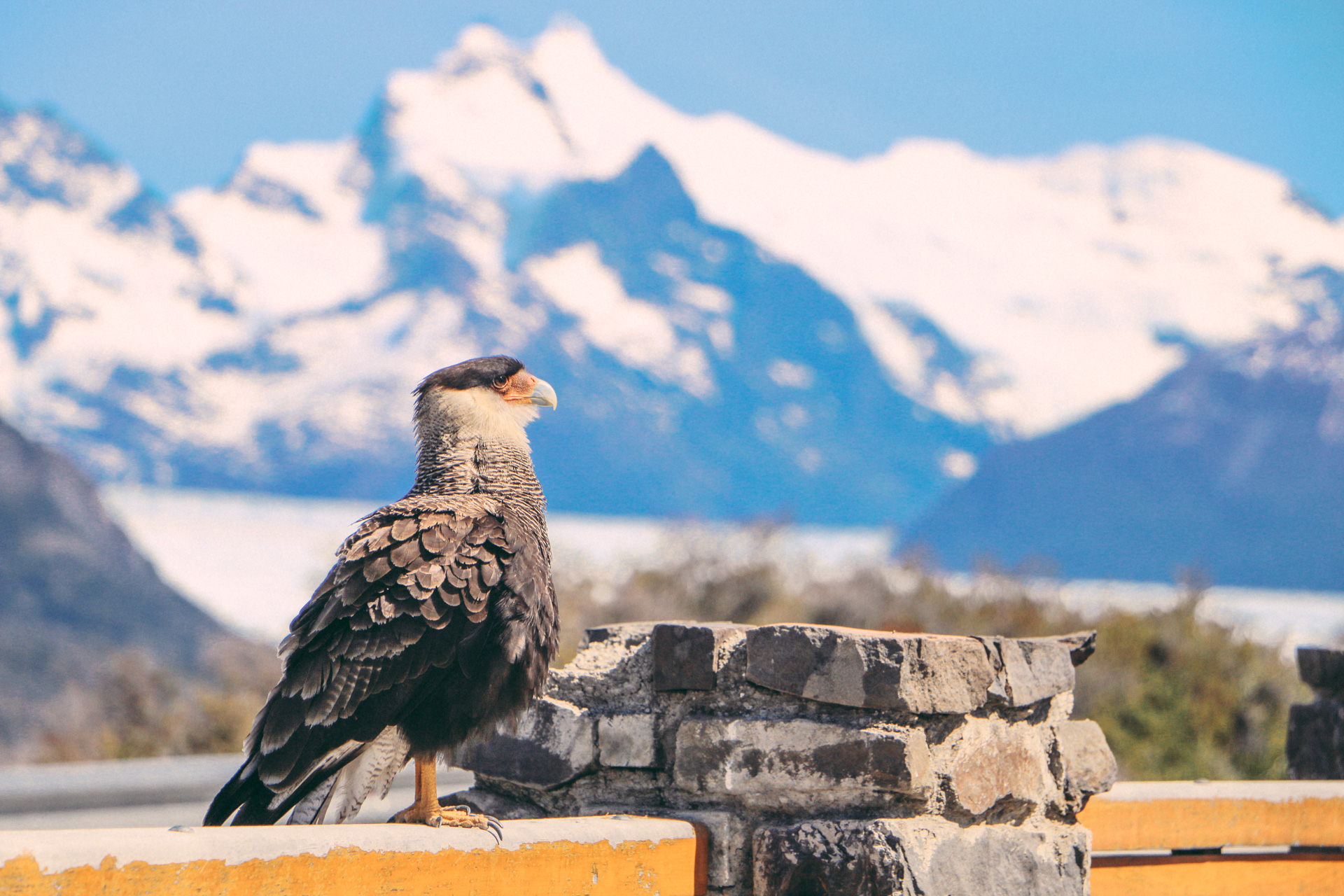 The Remise driver took us to the first viewing point where you could see the glacier in the background. It was spectacular to see from a distance looked so blue. There was also a hawk of some sort that was chilling by us (he wanted us to give him food our remise driver admitted). 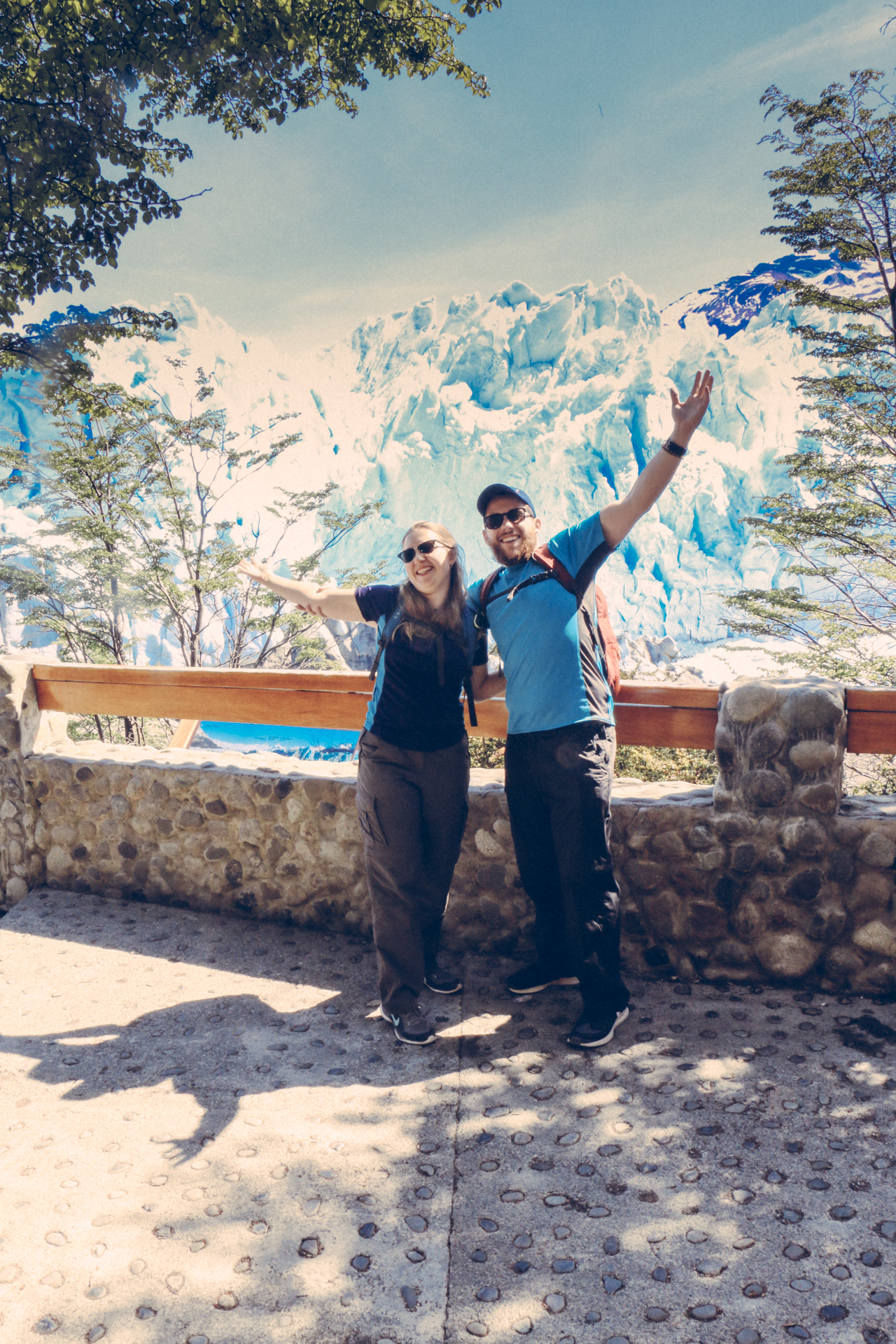 We drove an additional 20 mins from the first viewing point and ended up right by the glacier. It’s HUGE! It was probably the coolest, most impressive thing I’ve seen on this trip so far! 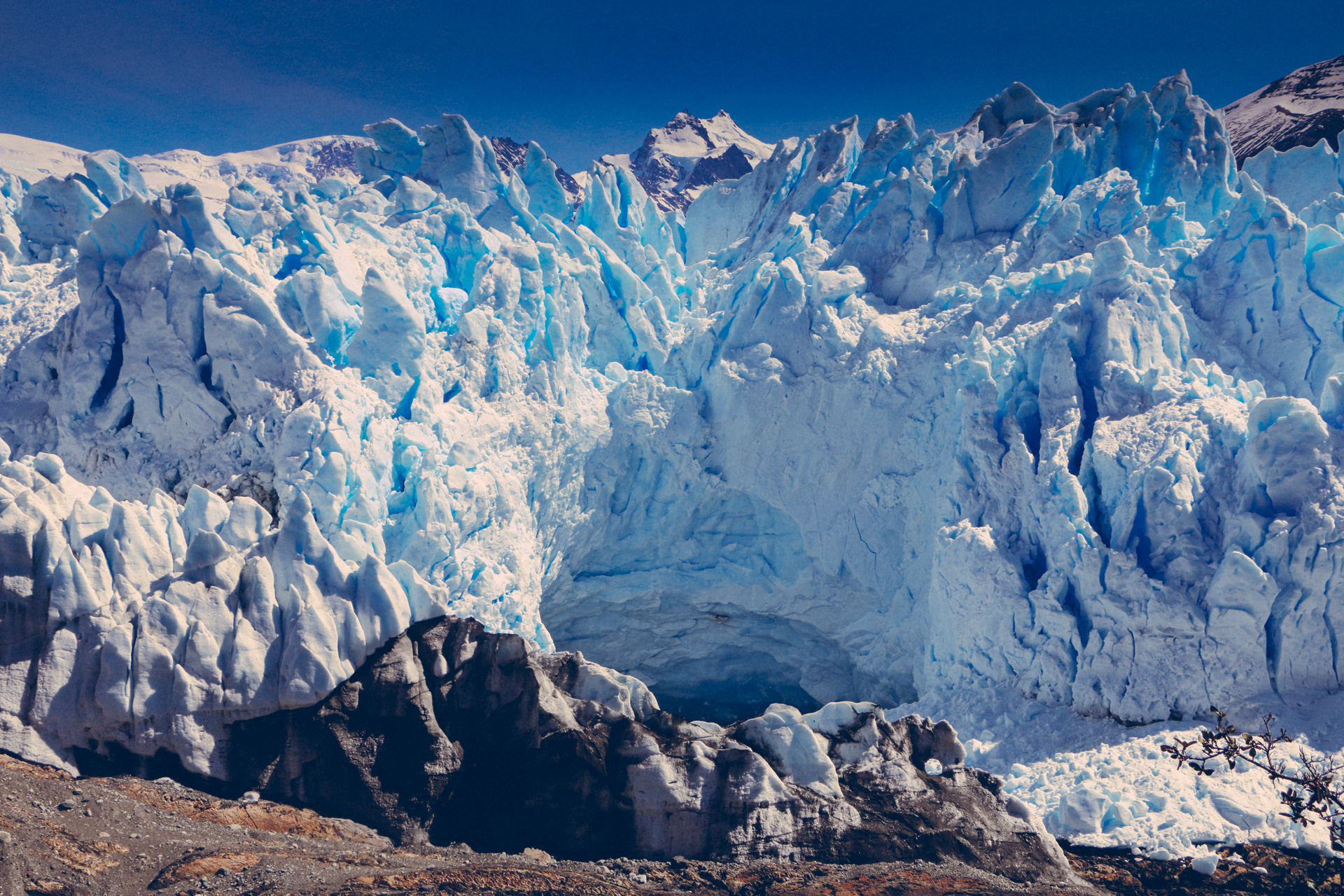 We walked so close to it and because we went in the afternoon chunks of it were melting off. The sound of the chunks falling sounded like bombs going off. 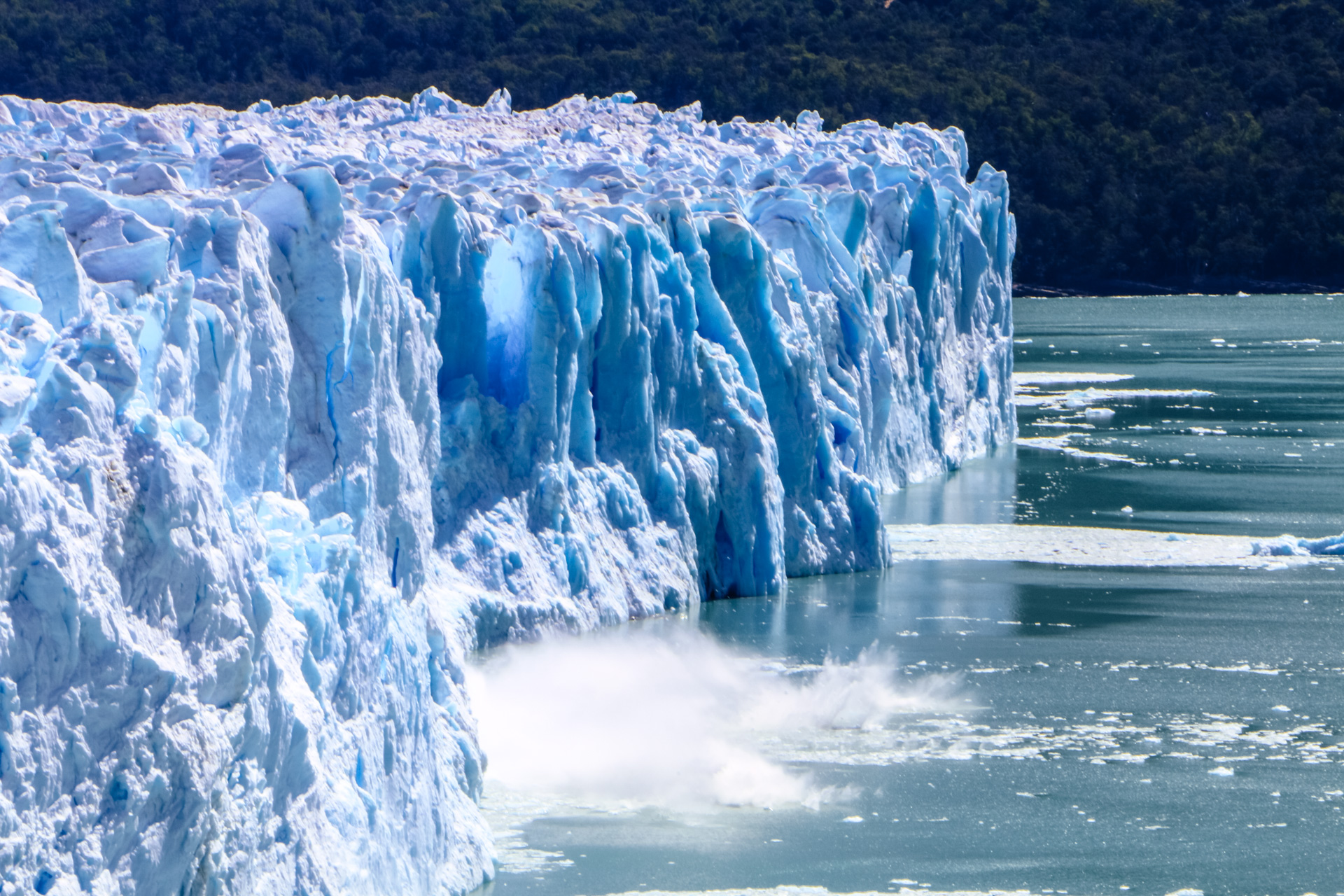 I can’t describe how unnerving it was to hear the force Mother Nature has. We were there for most of the day just appreciating the seer power and size of it. 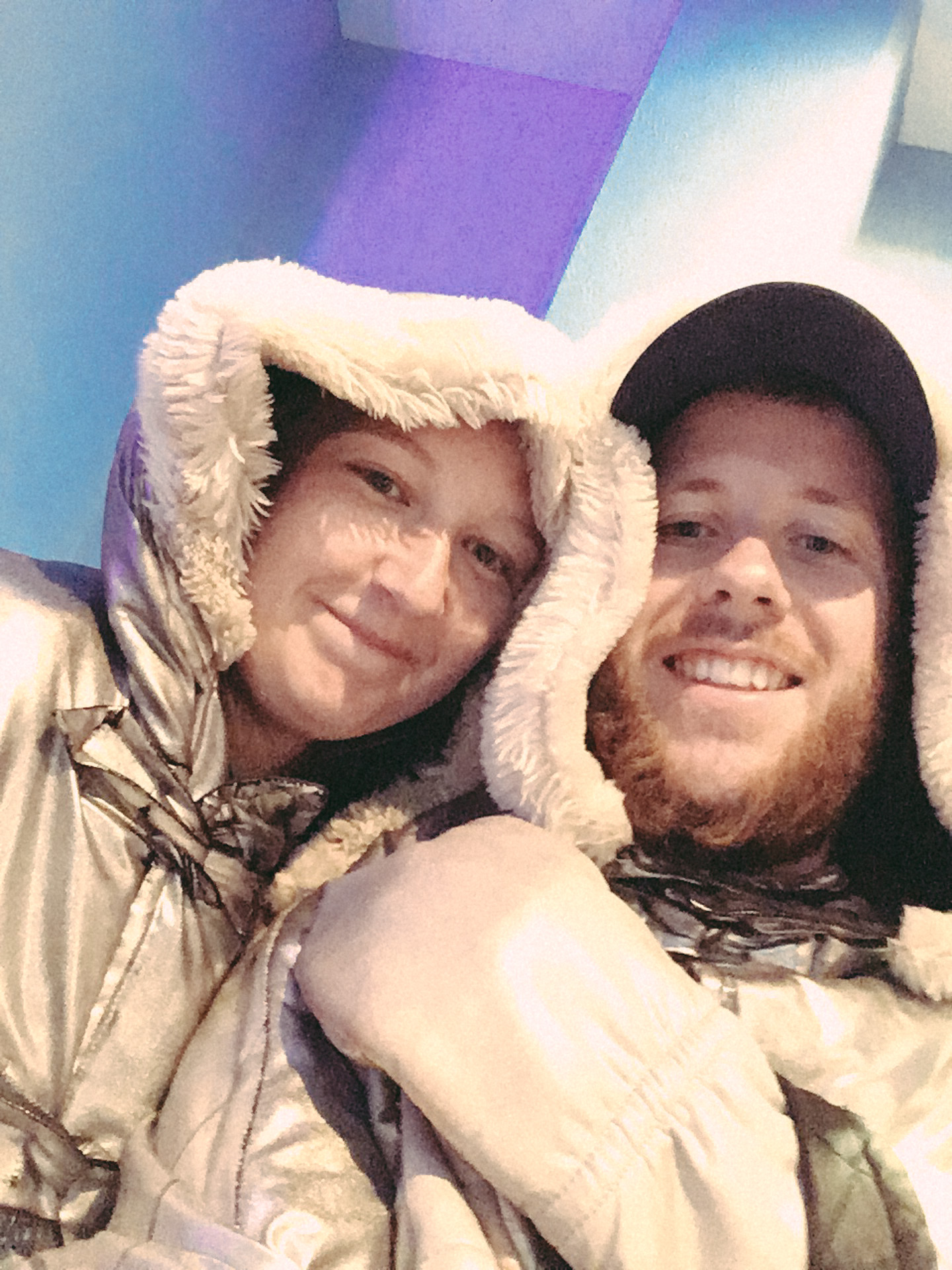 On the way back from the glacier Alex and I fancied going to the Glacerium a museum about how glacier form and cool interactive displays. The best thing about it though was the ice bar that was down stairs, we decided to do it for a laugh. I got very drunk very quickly as it was unlimited free drinks for 20 minutes and the sun was shining all day and I hadn’t had much water to drink. So going into a very cold room with very dangerous portions of alcohol did not to down well. The Argentinian family that were with us were necking sooooo much alcohol naturally taking advantage of the open bar. I felt tipsy after two drinks and told Al to get me an non alcoholic drink, but he came waddling back looking pleased with himself with two TiaMarias — silly boy.
After the ice bar the museum did become more enjoyable. The highlight was when the drunk mother (from the family of drunkerds) was shouting Paplo to take a photo, when actually Paplo was nowhere to been seen. Creased!

Feeling tipsy and sleepy we headed back to the hostel mentally preparing for camping and hiking in El Chalten where we were going next.

Was the food very Blasus in the cafe called Blasus. You have beaten me to Patagonia. I’m sure it was like stepping back in time.